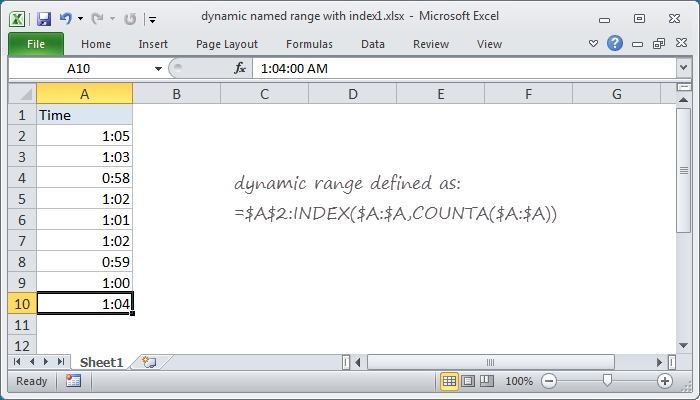 In the example shown, the named range "data" is defined by the following formula:

Note: this formula is meant to define a named range that can be used in other formulas.

How this formulas works

Note first that this formula is composed in two parts that sit either side of the range operator (:). On the left, we have the starting reference for the range, hard-coded as:

On the right is the ending reference for the range, created with INDEX like this:

Here, we feed INDEX all of column A for the array, then use COUNTA to figure out the "last row" in the range. COUNTA works well here because there are 10 values in column A, including a header row. COUNTA therefore returns 10, which goes directly into INDEX as the row number. INDEX then returns a reference to $A$10, the last used row in the range:

So, the final result of the formula is this range:

The above example works for a one-dimensional range. To create a two-dimensional dynamic range where the number of columns is also dynamic, you can use the same approach, expanded like this: 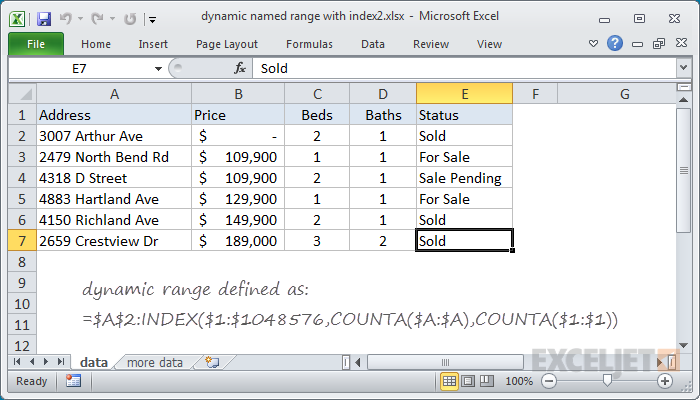 As before, COUNTA is used to figure out the "lastrow", and we use COUNTA again to get the "lastcolumn". These are supplied to index as row_num and column_num respectively.

However, for the array, we supply the full worksheet, entered as all 1048576 rows, which allows INDEX to return a reference in a 2D space.

There are several ways to determine the last row (last relative position) in a set of data, depending on the structure and content of the data in the worksheet:

Dynamic named range with OFFSET
This formula uses the OFFSET function to generate a range that expands and contracts by adjusting height and width based on a count of non-empty cells. The first argument in OFFSET represents the first cell in the data (the origin), which in this...
Related functions

I am pleased with your course and find it very easy to follow. Wish I had known long time go. It will improve my excel skill enormously. -Bipin