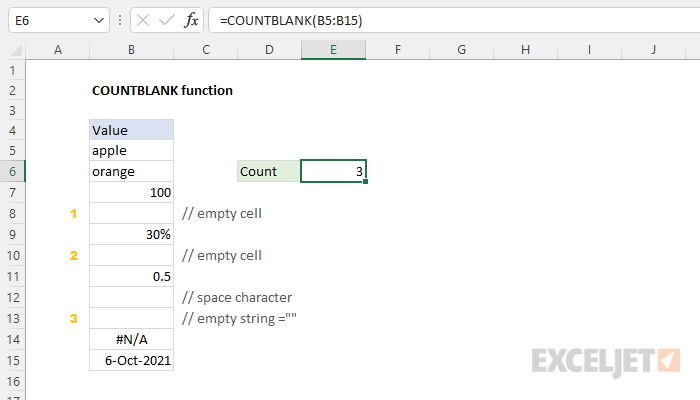 The Excel COUNTBLANK function returns a count of empty cells in a range. Cells that contain text, numbers, errors, spaces, etc. are not counted. Formulas that return empty strings ("") are counted as blank.

Count cells that are blank

The COUNTBLANK function returns a count of empty cells in a range. Cells that contain text, numbers, errors, spaces, etc. are not counted. Formulas that return an empty string ("") are counted as blank. COUNTBLANK takes just one argument, range, which must be a cell range.

In the example shown, the formula in cell E6 is:

COUNTBLANK returns 3 since there are 3 blank cells in the range. Note that cell B12 is not included because it contains a space character (" "). Cell B13 contains a formula that returns an empty string:

COUNTBLANK considers B13 blank and includes it in the count.

The IF function is often used to return empty strings. For example, if A1 contains 21, this formula in B1 will return an empty string:

The idea is that that cell B1 should be empty unless the value in A1 is greater than 30. The COUNTBLANK function will indeed count B1 as empty when the value in A1 is less than or equal to 30. However it's worth noting that COUNTA and COUNTIFS will count B1 as not empty in the same case. In other words they will see the empty string ("") returned by IF as not blank.

Some cells look empty, but actually contain invisible characters. To check which cells are blank use Go To > Special > Blanks:

LOVE your emails and free seminars. Since I have joined the mailing list, I have attended everything so far. Please keep them coming!
Cody
END_OF_DOCUMENT_TOKEN_TO_BE_REPLACED