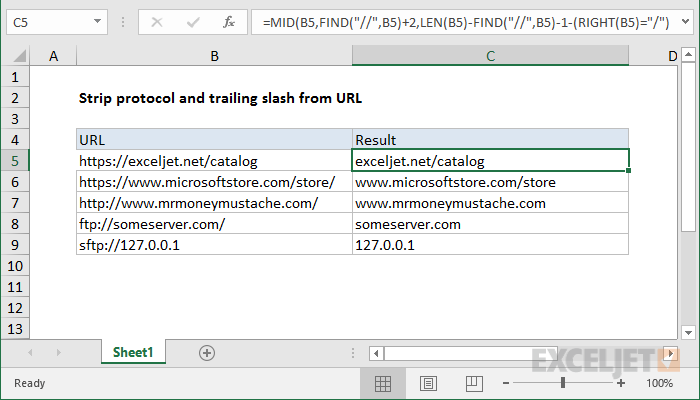 To remove the protocol (i.e. http://, ftp://, etc.) and trailing slash from a URL, you can use a formual based on the MID, FIND, and LEN functions. In the example shown, the formula in C5 is:

The url comes straight from B5.

The start is calculated using the FIND function like this:

FIND returns the position of the double slash ("//") in the URL as a number, so we add 2 in order to start extracting at the next character.

Chars represents the number of characters to extract. We calculate this using the following expression:

The LEN function calculates the length of the original URL, from which we subtract the position of "//" minus 1. we also use a bit of Boolean logic to conditionally subtract 1 more character:

The Boolean logic is used to avoid additional conditional logic.

Dave, you are an excellent teacher. I've learned so much from your videos (I'm a visual learner), and I appreciate that you provide the text/script for learners who learn best by reading. Your instructions are "pithy"/concise and the length of each video is about all I can absorb at one sitting (depending on the complexity)
Carol
END_OF_DOCUMENT_TOKEN_TO_BE_REPLACED