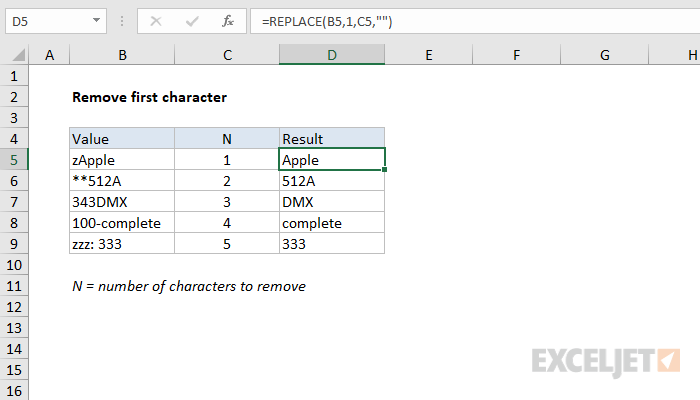 To remove the first character in a cell, you can use the REPLACE function. In the example shown, the formula in D5 is:

This formula uses the REPLACE function to replace the first character in a cell with an empty string (""). The arguments for REPLACE are configured as follows:

The behavior or REPLACE is automatic. With these inputs, the REPLACE function replaces the first character in B5 with an empty string and returns the result.

To always remove just the first character, simply hardcode both the start number and number of characters like this:

To remove the first N characters from a text value, use the generic form of the formula:

where N represents the number of characters to remove.

With RIGHT and LEFT

You can also use the RIGHT, LEFT, and LEN functions to remove the first character from a cell. The general form of the formula is:

where N is the number of characters to remove. In this formula, the RIGHT function is used to extract characters from the right, up to (but not including), the characters being removed from the left. In the example shown, the formula in D5 would be:

Getting a numeric value

The formulas above will always return text, even when the result contains numbers only. To get a numeric result, you can add zero like this:

The math operation causes Excel to coerce the text to numbers. This only works when the value returned by RIGHT contains just numbers.

Dave, you are an excellent teacher. I've learned so much from your videos (I'm a visual learner), and I appreciate that you provide the text/script for learners who learn best by reading. Your instructions are "pithy"/concise and the length of each video is about all I can absorb at one sitting (depending on the complexity)
Carol
END_OF_DOCUMENT_TOKEN_TO_BE_REPLACED