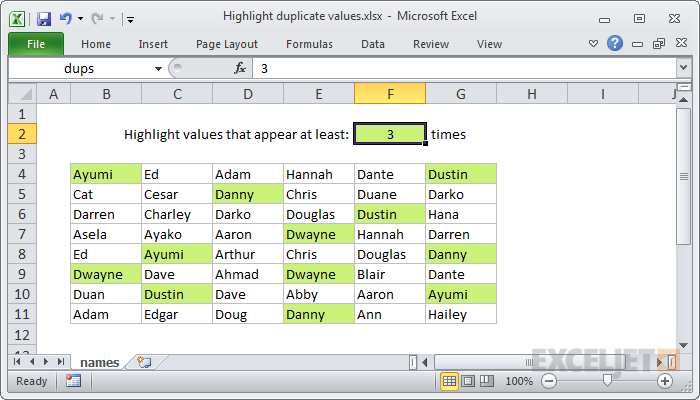 Note: Excel contains many built-in "presets" for highlighting values with conditional formatting, including a preset to highlight duplicate values. However, if you want more flexibility, you can highlight duplicates with your own formula, as explained in this article.

If you want to highlight cells that contain duplicates in a set of data, you can use a simple formula that returns TRUE when a value appears more than once.

For example, if you want to highlight duplicates in the range B4:G11, you can use this formula:

COUNTIF simply counts the number of times each value appears in the range. When the count is more than 1, the formula returns TRUE and triggers the rule.

When you use a formula to apply conditional formatting, the formula is evaluated relative to the active cell in the selection at the time the rule is created. In this case, the range we are using in COUNTIF is locked with an absolute address, but B4 is fully relative. So, the rule is evaluated for each cell in the range, with B4 changing and $B$4:$G$11 remaining unchanged.

Instead of hard-coding the number 1 into the formula you can reference a cell to make the number of duplicates variable.

You can extend this idea and make the formula easier to read by using named ranges. For example, if you name G2 "dups", and the range B4:G11 "data", you can rewrite the formula like so:

You can then change the value in G2 to anything you like and the conditional formatting rule will respond instantly, highlighting cell that contain values greater than or equal to the number you put in the named range "dups".

Just wanted to say thanks for sharing useful Excel tips online. There are so many websites that provide Excel tips online, but this is my go-to as your examples and explanations are easy to understand.
Amy
END_OF_DOCUMENT_TOKEN_TO_BE_REPLACED