XLOOKUP with boolean OR logic 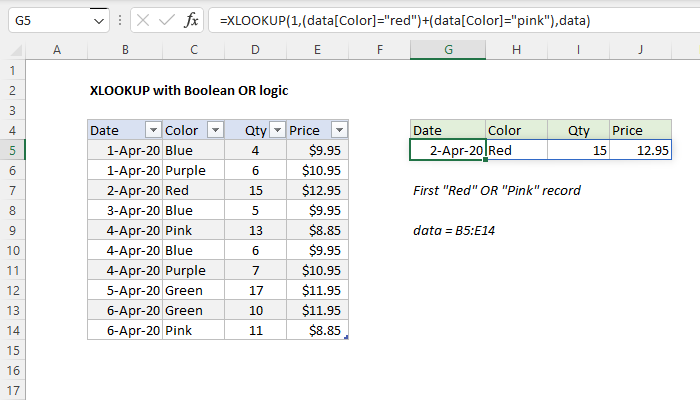 To configure XLOOKUP with boolean OR logic, use a lookup value of 1 with a logical expression based on addition. In the example shown, the formula in G5 is:

where "data" is the name of the Excel Table to the left.

The lookup value is provided as 1, for reasons that become clear below. For the lookup array, we use an expression based on boolean logic:

After the expression is evaluated, we have two arrays of TRUE and FALSE values like this:

The math operation of adding these arrays together converts the TRUE and FALSE values to 1s and 0s, and results in a new array composed only of 1s and 0s:

Notice the 1s in this array correspond to rows where the color is either "red" or "pink".

We can now rewrite the formula as:

The first 1 in the lookup array corresponds to row three of the data, where the color is "red". Since XLOOKUP will by default return the first match, and since the entire table "data" is supplied as the return array, XLOOKUP returns the third row as a final result.

XLOOKUP with logical criteria
To use XLOOKUP with multiple logical, build expressions with boolean logic and then look for the number 1. In the example XLOOKUP is used to lookup the first sale to Chicago over $250. The formula in G6 is: = XLOOKUP ( 1 ,( D5:D14 = "chicago...

What can I say. It has worked brilliantly. Thank you so much for your help. -Tracey