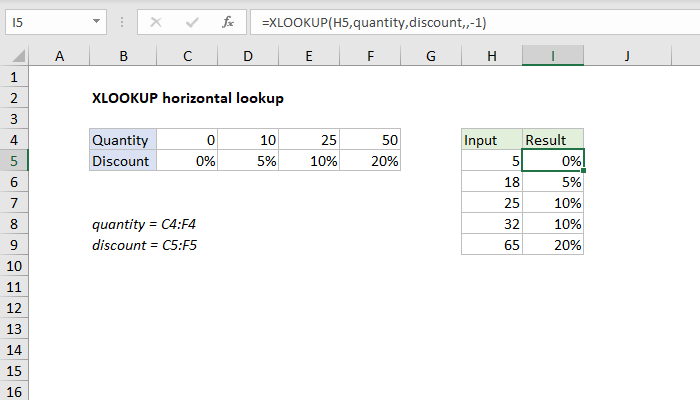 To perform a horizontal lookup with the XLOOKUP function, supply a lookup value, a lookup array, and a result array. Provide a match_mode argument for approximate match if needed. In the example shown, the formula in I5, copied down the table, is:

One nice benefit of the XLOOKUP function is that the syntax used for horizontal lookups is the same as for vertical lookups.

In the example shown, the data in C4:F5 contains quantity-based discounts. As the quantity increases, the discount also increases. The table to the right shows the discount returned by XLOOKUP for several random quantities. The formula in F5, copied down, is:

The equivalent HLOOKUP formula for this example, is either of the two formulas below:

There are several differences worth noting:

XLOOKUP basic approximate match
In the example shown, the table in B4:C13 contains quantity-based discounts. As the quantity increases, the discount also increases. The table in E4:F10 shows the discount returned by XLOOKUP for several random quantities. XLOOKUP is configured to...
Related functions