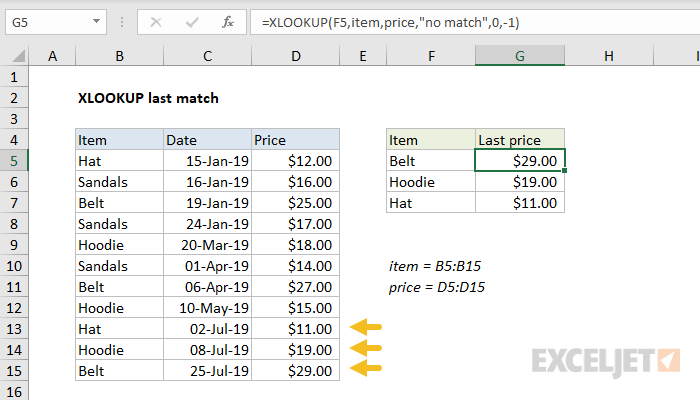 To retrieve the last match in a data set with XLOOKUP, set the fifth argument to -1. In the example shown, the formula in G5, copied down, is:

By default, XLOOKUP will return the first match in a data set. However, XLOOKUP offers an optional argument called search_mode to control the order in which data is searched. Setting search mode to -1 causes XLOOKUP to search "last to first" or, in other words, search backwards through the data. You can see this option used in the example shown. The formula in G5, copied down, is:

XLOOKUP's arguments are configured as follows:

Note: this example depends on data being sorted by date in ascending order. If data is unsorted, see this example.

Just wanted to say thanks for sharing useful Excel tips online. There are so many websites that provide Excel tips online, but this is my go-to as your examples and explanations are easy to understand.
Amy
END_OF_DOCUMENT_TOKEN_TO_BE_REPLACED