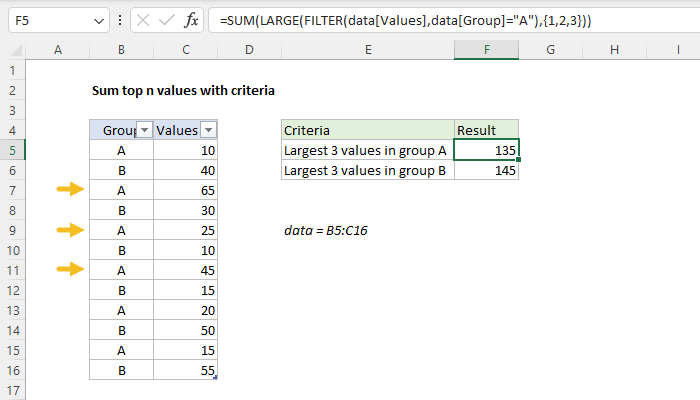 To sum the top n values in a range matching criteria, you can use a formula based on the LARGE function, wrapped inside the SUMPRODUCT function. In the generic form of the formula (above), range represents a range of cells that are compared to criteria, values represents numeric values from which top values are retrieved, and N represents the idea of Nth value.

In its simplest form, LARGE returns the "Nth largest" value in a range with this construction:

will return the 2nd largest value in the range C5:C12, which is 12 in the example shown.

However, if you supply an "array constant" (e.g. a constant in the form {1,2,3}) to LARGE as the second argument, LARGE will return an array of results instead of a single result. So, the formula:

So, the trick here is to filter the values based on color before LARGE runs. We do this with the expression:

Which results in an array of TRUE / FALSE values. During the multiplication operation, these values are coerced into ones and zeros:

So the final result is that only values associated with the color "red" survive the operation:

and the other values are forced to zero.

Note: this formula won't handle text in the value range. See below.

If you have text anywhere in the value ranges, the LARGE function will throw a #VALUE error and stop the formula from working.

To handle text in the value range, you can add the IFERROR function like this:

Here, we trap errors from LARGE caused by text values and replace with zero. Using IF inside LARGE requires that the formula be entered with control + shift + enter, so we switch to SUM instead of SUMPRODUCT.

Note: I ran into this formula posted by the amazing Barry Houdini on stackoverflow.

Sum top n values
In its simplest form, LARGE will return the "Nth largest" value in a range. For example, the formula: = LARGE ( B4:B13 , 2 ) will return the 2nd largest value in the range B4:B13 which, in the example above, is the number 9. However, if you supply...

Create array of numbers
Note: In Excel 365 , the new SEQUENCE function is a better and easier way to create an array of numbers. The method explained below will work in previous versions. The core of this formula is a string that represents rows. For example, to create an...
Related functions