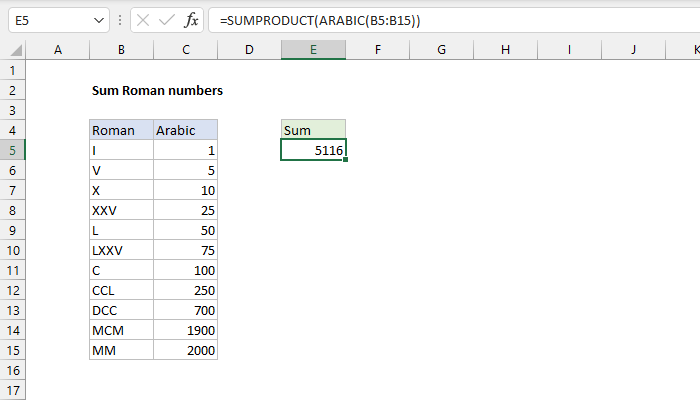 To sum a range of Roman numbers, you can use a formula based on the ARABIC and SUMPRODUCT functions. In the example shown, the formula in E5 is:

The result is the sum of the Roman numbers in B5:B15. The Arabic numbers in C5:C15 are shown for reference only.

Note: the ARABIC function was introduced in Excel 2013.

Notice the Roman numbers are provided as text strings.

In the worksheet shown, we feed the entire range of Roman numbers in B5:B15 into the ARABIC function in one step:

Because there are 11 cells in the range, the result is an array that contains 11 numbers:

Each number corresponds to a Roman number in B5:B15. This array is returned directly to the SUMPRODUCT function:

With just one array to process, SUMPRODUCT returns the sum of the numbers: 5116.

This example is a good example of the power of nesting functions together. It also illustrates how array formulas can be quite simple.

Note: the ROMAN function performs the opposite conversion as the ARABIC function, converting Arabic numbers to Roman numbers.

Why SUMPRODUCT and not SUM?

Why can't we use the SUM function like this:

The answer is a bit complicated. In Excel 365, you can use SUM without any special consideration*, since Excel 365 handles arrays natively:

In other versions of Excel, the SUM function will work, but must be entered as an array formula with Control + Shift + Enter:

With SUMPRODUCT, the formula will work in all versions of Excel:

In other words, using SUMPRODUCT ensures the formula will work in all versions of Excel ** without any special handling. This is because SUMPRODUCT can handle many array operations natively.

* If an Excel 365 worksheet that uses the SUM option is opened in an earlier version of Excel, Excel will automatically convert the formula to the array form and you will see curly braces {} around the formula. The result will remain unchanged. However, if a user edits the formula, and doesn't re-enter with Control + Shift + Enter, SUM will not return the correct result.

You will also see curly braces added to the SUMPRODUCT version when a worksheet created with Excel 365 is opened in older versions of Excel. However, in this case, the formula can be re-entered without Control + Shift + Enter and will still return the correct result. In other words, Excel changes the formula to the array form automatically since it contains an array operation, but the array form is not necessary since SUMPRODUCT can handle the array operation natively.

** The ARABIC function was introduced in Excel 2013.

Map inputs to arbitrary values
This formula uses the value in cell F6 for a lookup value, the range B5:C10 for the lookup table, 2 to indicate "2nd column", and zero as the last argument to force an exact match. Although in this case we are mapping numeric inputs to numeric...

Map text to numbers
This formula uses the value in cell F7 for a lookup value, the range B6:C10 for the lookup table, the number 2 to indicate "2nd column", and zero as the last argument to force an exact match. Although in this case we are mapping text values to...

Translate letters to numbers
At the core, this formula uses an array operation to generate an array of letters from the input text, translates each letter individually to a number, then joins all numbers together again and returns the output as a string. To parse the input...

Sum text values like numbers
The heart of this formula is a basic INDEX and MATCH formula, used to translate text values into numbers as defined in a lookup table. For example, to translate "EX" to the corresponding number, we would use: = INDEX ( value , MATCH ( "EX...
Related functions

The Excel ARABIC function converts a Roman numeral as text to an Arabic numeral. For example, the formula =ARABIC("VII") returns 7.

Excel ROMAN Function
The Excel ROMAN function converts a number to a Roman numeral as text. For example, the formula =ROMAN(4) returns IV.