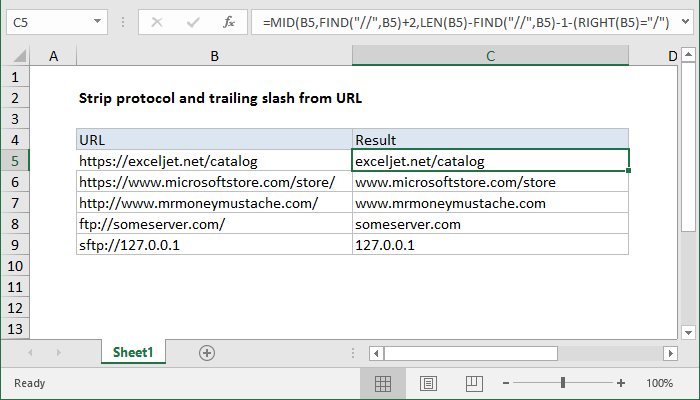 To remove the protocol (i.e. http://, ftp://, etc.) and trailing slash from a URL, you can use a formual based on the MID, FIND, and LEN functions. In the example shown, the formula in C5 is:

The url comes straight from B5.

The start is calculated using the FIND function like this:

FIND returns the position of the double slash ("//") in the URL as a number, so we add 2 in order to start extracting at the next character.

Chars represents the number of characters to extract. We calculate this using the following expression:

The LEN function calculates the length of the original URL, from which we subtract the position of "//" minus 1. we also use a bit of Boolean logic to conditionally subtract 1 more character:

The Boolean logic is used to avoid additional conditional logic.

Get name from email address
At the core, this formula is extracting characters starting from the left, and using the FIND function to figure out how many characters to extract. First, FIND looks for the "@" character inside the email address " achang@maaker.com ". The "@"...
Related functions