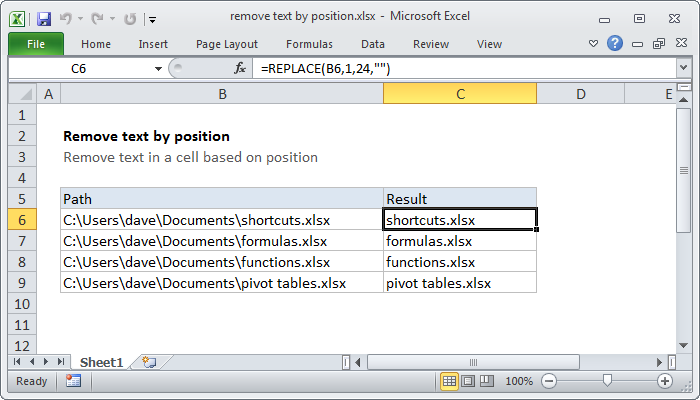 To remove text from a cell by position, you can use the REPLACE function. In the example shown, the formula in C6 is:

which replaces the first 24 characters in the text with an empty string ("").

The replace function lets you replace text based on its location and length. In this case, we want to strip off the drive and path, and leave only the document name.The length of this part of the string (text) is 24 and the starting position is 1, and the pattern never changes.

The REPLACE function can handle this easily, we just need to provide a cell reference (B6), a starting position (1), the number of characters to replace (24), and the text to use for replacement (""):

For replacement, we use an empty string ("") which causes REPLACE to replace characters 1-24 with nothing.

Since the text in this case never varies, we could also use the the SUBSTITUTE function to perform the name operation:

Remove text by variable position
To remove text from a cell, when the text is at a variable position, you can use a formula based on the REPLACE function , with help from the FIND function . In the example shown, the formula in C6 is: = REPLACE ( B6 , 1 , FIND ( ":" , B6...

This site is perfect for me as a moderate Excel user who sometimes needs a formula that I cannot figure out on my own. It's clean, easy to use, comprehensive and doesn't have distracting material like many other Excel help sites. -Susan