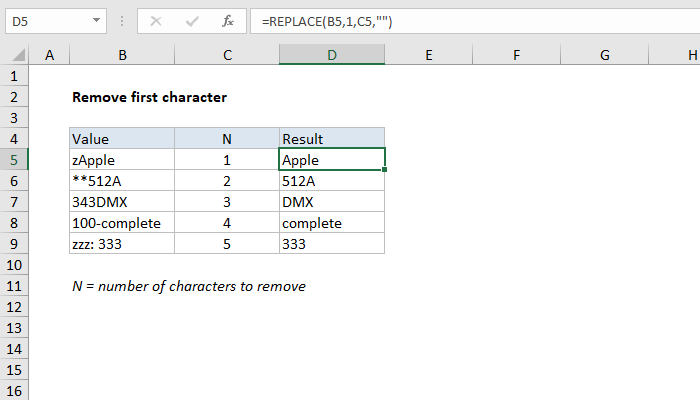 To remove the first character in a cell, you can use the REPLACE function. In the example shown, the formula in D5 is:

This formula uses the REPLACE function to replace the first character in a cell with an empty string (""). The arguments for REPLACE are configured as follows:

The behavior or REPLACE is automatic. With these inputs, the REPLACE function replaces the first character in B5 with an empty string and returns the result.

To always remove just the first character, simply hardcode both the start number and number of characters like this:

To remove the first N characters from a text value, use the generic form of the formula:

where N represents the number of characters to remove.

With RIGHT and LEFT

You can also use the RIGHT, LEFT, and LEN functions to remove the first character from a cell. The general form of the formula is:

where N is the number of characters to remove. In this formula, the RIGHT function is used to extract characters from the right, up to (but not including), the characters being removed from the left. In the example shown, the formula in D5 would be:

Getting a numeric value

The formulas above will always return text, even when the result contains numbers only. To get a numeric result, you can add zero like this:

The math operation causes Excel to coerce the text to numbers. This only works when the value returned by RIGHT contains just numbers.

Remove characters from right
The LEFT function is perfect for extracting characters starting from the left side of a text string. We use LEFT in this formula to extract all characters up to the number of characters we want to trim. The challenge, for values with variable length...

Split text and numbers
Overview The formula looks complex, but the mechanics are in fact quite simple. As with most formulas that split or extract text, the key is to locate the position of the thing you are looking for. Once you have the position, you can use other...

Split numbers from units of measure
Sometimes you encounter data that mixes units directly with numbers (i.e. 8km, 12v, 7.5hrs). Unfortunately, Excel will treat the numbers in this format as text, and you won't be able to perform math operations on such values. To split a number from...

How to combine functions in a formula
In this video you'll learn how to use multiple Excel functions to split, manipulate, and rejoin values inside a single formula.

How to clean text with CLEAN and TRIM
This video shows you how to use two text functions, CLEAN and TRIM, to strip extra spaces and remove line breaks from text.