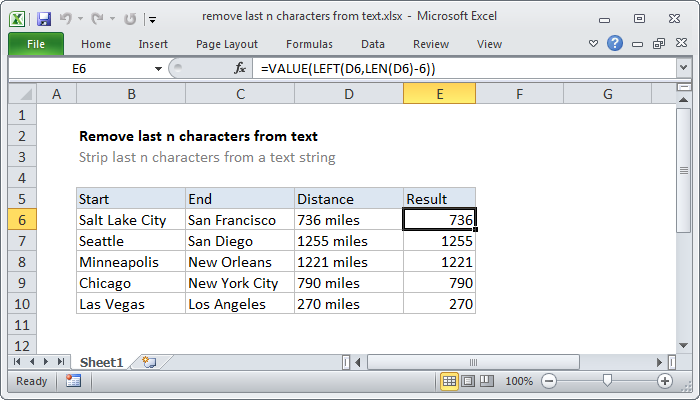 which trims " miles" from each value returning just the number.

The LEFT function is perfect for extracting characters starting from the left side of a text string. We use LEFT in this formula to extract all characters up to the number of characters we want to trim.

The challenge, for values with variable length, is that we don't know exactly how many characters to extract. That's where the LEN function is used.

Working from the inside out, LEN calculates the total length of each value. For D6 (736 miles) the total length is 9. To get the number of characters to extract, we subtract 6, which the length of " miles", including the space character. The result is 3, which is fed to LEFT as the number of characters to extract. LEFT then returns the text "736" as a text value.

Finally, because we want a numeric value (and not text) we run the text through the VALUE function, which converts numbers in text format to actual numbers.

Note: there is no reason to use the VALUE function if you don't need a numeric result.

Split text and numbers
To separate text and numbers, you can use a formula based on the FIND function, the MIN function, and the LEN function with the LEFT or RIGHT function, depending on whether you want to extract the text or the number. In the example shown, the...

Split numbers from units of measure
Note: these is an experimental formula that uses a hard coded array constant, set down here for reference and comment. Casually tested only, so take care if you use or adapt. Sometimes you encounter data that mixes units directly with numbers (i.e...
Related functions