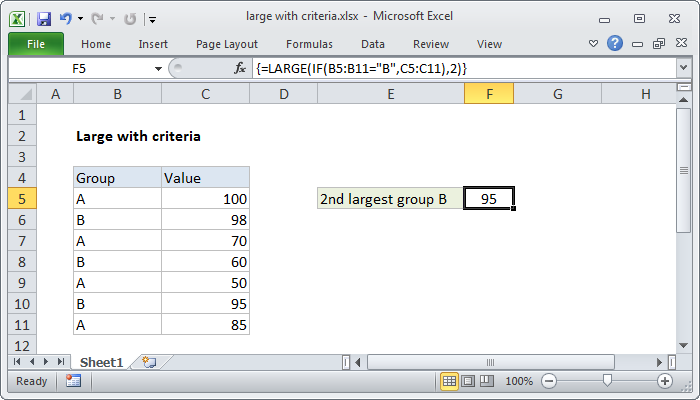 To return the largest values in a set of data with criteria, you can use the a formula based on the LARGE and IF functions.

The LARGE function can be used to retrieve "nth" largest value in numeric data like so:

In this example, we need include only values associated with group B. To do this, we use the IF function to filter:

Since we are running a logical test on an range of cells, we get an array of results:

Note that only values in group B make it into the array. Group A values become FALSE since they fail the logical test. This array is returned inside the LARGE function with 2 hardcoded as as "nth" (the argument "k" in LARGE):

LARGE then returns 95, the second largest value in group B as the final result.

To take into account multiple criteria, you can extend the formula with boolean logic in a form like this:

Where criteria1 and criteria2 and represent an expression to test values in a criteria range, as shown in the original example above.

Sum top n values
To sum the top values in a range, you can use a formula based on the LARGE function, wrapped inside the SUMPRODUCT function. In the generic form of the formula (above), rng represents a range of cells that contain numeric values and N represents the...

What a great site! Answers are clear unambiguous and following the 80/20 principle. Finding a site of such quality proves to me what gems are still hidden in the world and around the Web. -David