How to fix the #NAME? error 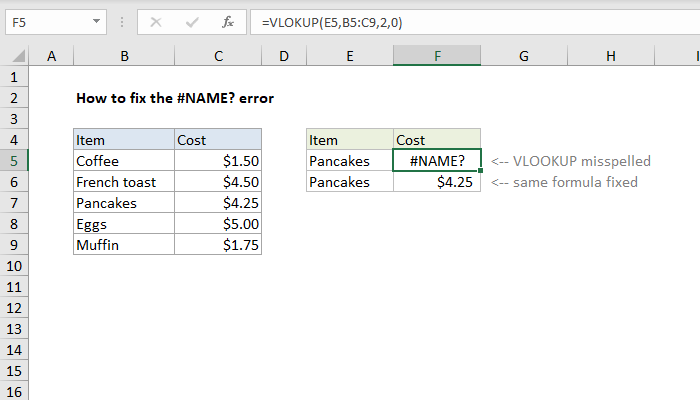 The #NAME? error occurs when Excel doesn't recognize something. Often, the #NAME? occurs when a function name is misspelled, but there are other causes, as explained below. Fixing a #NAME? error is usually just a matter of correcting spelling or a syntax. See below for more information and steps to resolve.

The #NAME? error occurs when Excel can't recognize something.  Frequently, the #NAME? occurs when a function name is misspelled, but there are other causes, as explained below. Fixing a #NAME? error is usually just a matter of correcting spelling or a syntax.

The examples below show misconfigured formulas that return the #NAME error and the steps needed to fix the error and get a working formula again.

In the example below, the VLOOKUP function is used to retrieve an item price in F3. The function name "VLOOKUP" is spelled incorrectly, and the formula returns #NAME?

In the example below, the MAX and MIN functions are used to find minimum and maximum temperatures. the formulas in F2 and F3, respectively, are:

Below the range used in F3 has been fixed:

Note: forgetting to include a colon (:) in a range will also trigger the #NAME? error.

In the example below, the named range "data" equals C3:C7. In F2, "data" is misspelled "daata" and the MAX function returns #NAME?

Below, the spelling is corrected and the MAX function correctly returns 325 as the maximum sales number:

Notice named ranges are not enclosed by quotes ("") in a formula.

Named ranges can have local (this worksheet only) or global (all worksheets) scope, so you might see a #NAME? error if you try to reference a valid named range that is scoped locally to a different worksheet. You can use the Name Manager (Control + F3, Windows only) to check the scope named ranges. Read more about named ranges here.

When a text value is input without double quotes, Excel thinks tries to interpret the value as a function name, or named range. This can cause a #NAME? error when no match is found. In the example below, the LEN function is used to get the length of the word "apple". In B3 the formula is entered without the text string "apple" in quotes (""). Because apple is not a function name or named range, the result is #NAME?

Below, quotes have been added and the LEN function now works correctly:

Text values needed to be quotes with straight double quotes (i.e. "apple"). If "smart" (sometimes called "curly") quotes are used, Excel won't interpret these as quotes at all and will instead return #NAME?

To fix, simply replace the smart quotes with straight quotes:

Note: some applications, like Microsoft Word, may change straight quotes to smart quotes automatically, so take care if you are moving a formula in and out of different applications or environments.

How to fix the #N/A error
About the #N/A error The #N/A error appears when something can't be found or identified. It is often a useful error, because it tells you something important is missing – a product not yet available, an employee name misspelled, a color option that...

How to fix the #VALUE! error
The #VALUE! error appears when a value is not the expected type. This can occur when cells are left blank, when a function that is expecting a number is given a text value, and when dates are evaluated as text by Excel. Fixing a #VALUE! error is...

How to fix the #NUM! error
The #NUM! error occurs in Excel formulas when a calculation can't be performed. For example, if you try to calculate the square root of a negative number, you'll see the #NUM! error. The examples below show formulas that return the #NUM error. In...

How to fix the #### (hashtag) error
The "hashtag" error, a string of hash or pound characters like ####### is not technically an error, but it looks like one. In most cases, it indicates the column width is too narrow to display the value as formatted. You might run into this odd...

How to fix the #CALC! error
With the introduction of Dynamic Arrays in Excel , formulas there is more emphasis on arrays . The #CALC! error occurs when a formula runs into an calculation error with an array. The #CALC! error is a "new" error in Excel, introduced with dynamic...

How to fix the #SPILL! error
About spilling and the #SPILL! error With the introduction of Dynamic Arrays in Excel , formulas that return multiple values " spill " these values directly onto the worksheet. The rectangle that encloses the values is called the " spill range "...
Related functions

The Excel ISERROR function returns TRUE for any error type excel generates, including #N/A, #VALUE!, #REF!, #DIV/0!, #NUM!, #NAME?, or #NULL! You can use ISERROR together with the IF function to test for errors and display a custom message, or...

The Excel ERROR.TYPE function returns a number that corresponds to a specific error value. You can use ERROR.TYPE to test for specific kinds of errors. If no error exists, ERROR.TYPE returns #N/A. See below for a key to the error codes returned...

Excel formula error codes
In this video, we'll walk through each of the error codes that Excel displays when there's something wrong with a formula. We'll also look at some simple ways to resolve the errors.

How to trace a formula error
It can sometimes be difficult to know what is causing formula errors. In this video, we'll look at how to track down the source of a formula error in Excel.
See also
Excel Formula Errors
Excel formulas and functions
How to use formula criteria (50 examples)
29 ways to save time with Excel formulas

Hi guys, I just wanted to thank you for your super clear instructions on a tricky Excel problem I was tackling this morning - your simple-to-follow descriptions and instructions gave me the answer I needed straightaway! I have now bookmarked your website and subscribed to your email! Well done and thank you!!! -Cat