Get relative row numbers in range 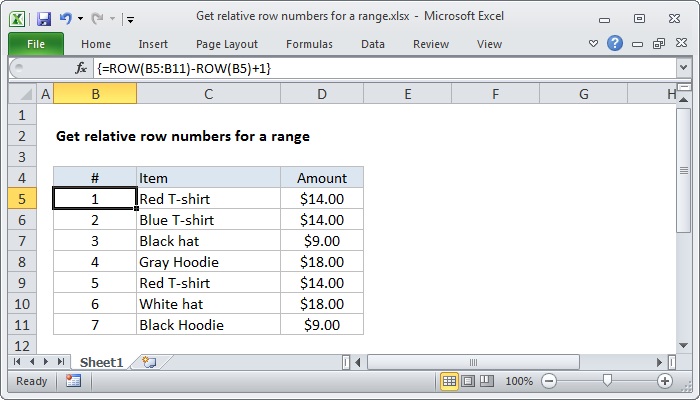 To get a full set of relative row numbers in a range, you can use an array formula based on the ROW function. In the example shown, the formula in B5:B11 is:

This is formula will continue to generate relative numbers even when the range is moved. However, it's not a good choice if rows need to be sorted, deleted, or added, because the array formula will prevent changes. The formula options explained here are will work better.

The first ROW function generates an array of 7 numbers like this:

The second ROW function generates an array with just one item like this:

which is then subtracted from the first array to yield:

Finally, 1 is added to get:

With a named range, you can create a more generic version of the formula using the MIN function or the INDEX function. For example, with the named range "list", you can use MIN like this:

With INDEX, we fetch the first reference in the named range, and using ROW on that:

You'll often see "relative row" formulas like this inside complex array formulas that need row numbers to calculate a result.

With the SEQUENCE function the formula to return relative row numbers for a range is simple:

The ROWS function provides the count of rows, which is returned to the SEQUENCE function. SEQUENCE then builds an array of numbers, starting with the number 1.  So, following the original example above, the formula below returns the same result:

Note: the SEQUENCE formula is a new dynamic array function available only in Excel 365.

Create array of numbers
Note: In Excel 365 , the new SEQUENCE function is a better and easier way to create an array of numbers. The method explained below will work in previous versions. The core of this formula is a string that represents rows. For example, to create an...

Extract all partial matches
The core of this formula is the INDEX function, with AGGREGATE used to figure out the "nth match" for each row in the extract area: INDEX ( data , nth_match_formula ) Almost all of the work is in figuring out and reporting which rows in "data" match...
Related functions