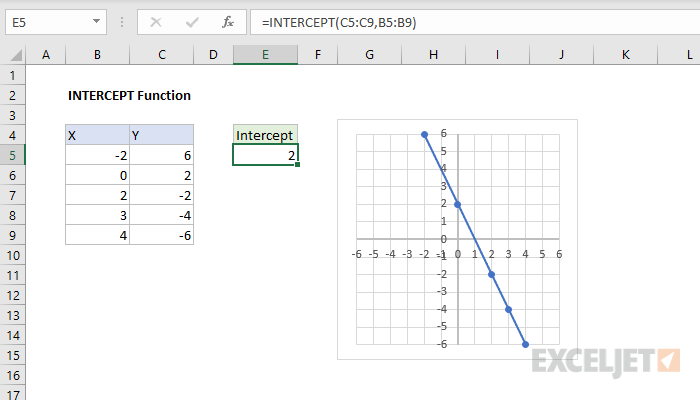 The Excel INTERCEPT function returns the point at which a regression line will intersect the y-axis based on known x and y values.

Get intercept of linear regression line

The INTERCEPT function returns the point at which a line will intersect the y-axis based on known x and y values. The intercept point is based on a regression line plotted with known x and y values. A regression line is a line that best fits that known data points. Use the INTERCEPT function to calculate the value of a dependent variable when the independent variable is zero (0).

Values can be entered directly in INTERCEPT as array constants:

Typically, values are supplied as ranges. In the example shown, the formula in E5 is:

The equation for the intercept of the regression line (a) is:

where b is the slope. The formula used by Excel to calculate slope is the same one used by the SLOPE function:

In the example shown, the intercept formula can be manually created like this:

This formula returns the same result as that returned by the INTERCEPT function.

Just a big thanks! You were the first that were able to explain Index and Match in a practical, straightforward, non-excel guru oriented way!
Jacques
END_OF_DOCUMENT_TOKEN_TO_BE_REPLACED