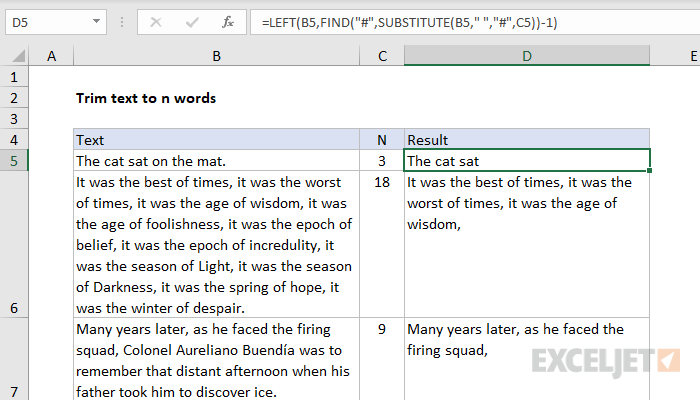 We need a way to split text at a certain marker that corresponds to a certain number of words. Excel doesn't have a built-in function to parse text by word, so are using the SUBSTITUTE function's "instance" argument to replace an "nth space" character with the pound sign (#), then using FIND and LEFT to discard all text after the marker.

The resulting string is returned to the FIND function, configured to look for "#".

Since the "#" is the 12th character in the text, FIND returns 12. We don't want to include the space character itself in, so we subtract 1:

LEFT returns the final result from the formula, "The cat sat".

Note: the pound character ("#") is arbitrary and can be replaced with any character that won't appear in the text.

Add elipses or other character

To add "..." to the end of the trimmed text, use concatenation like this:

Just wanted to say thanks for sharing useful Excel tips online. There are so many websites that provide Excel tips online, but this is my go-to as your examples and explanations are easy to understand.
Amy
END_OF_DOCUMENT_TOKEN_TO_BE_REPLACED