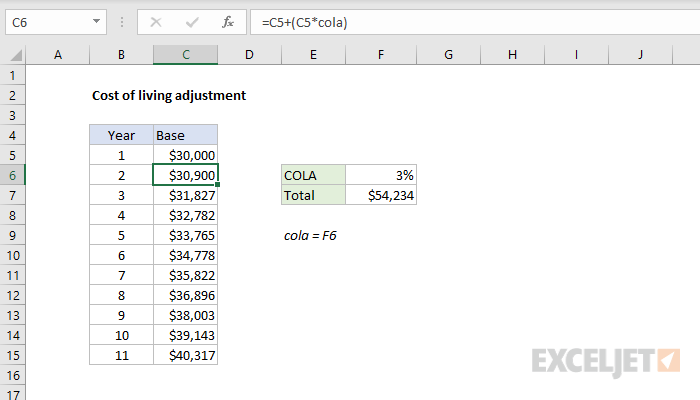 To calculate a cost of living (COLA) adjustment in Excel, you can use a simple formula that multiplies the base times the adjustment percentage, then adds the result to the base. In the example shown, the formula in C6, copied down, is:

where cola is the named range F6, and contains the adjustment as a percentage.

The goal in this example is to calculate a cost of living (COLA) adjustment for each of the eleven years shown, starting on the second year. The actual adjustment percentage is entered in cell F6, which is the named range cola. Each year, the adjustment should be applied to the previous base amount in column C, starting with the base amount in cell C5.

The formula in cell C6, copied down is:

As the formula is copied down the table, the relative reference C5 changes at each row, while the named range cola (F6) behaves like an absolute reference and does not change. The result on each new row is the previous year's base plus the adjustment.

To calculate the total of all adjustments, the formula in F7 is:

This is an array formula, and must be entered with control+shift+enter, except in Excel 365. The result is the total of all adjustments made since year 1.

The screen below shows an alternative layout that breaks out the adjustment amount separately, and allows a different rate of adjustment for each year. 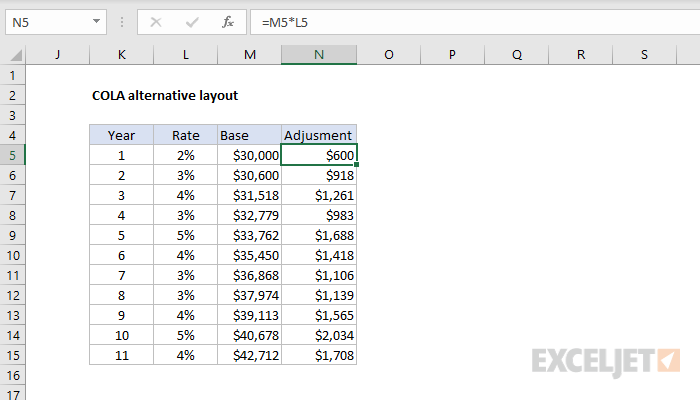 The formula in N5, copied down, calculates the adjustment:

The formula in M6, copied down, calculates a new base for year:

Just wanted to say thanks for sharing useful Excel tips online. There are so many websites that provide Excel tips online, but this is my go-to as your examples and explanations are easy to understand.
Amy
END_OF_DOCUMENT_TOKEN_TO_BE_REPLACED