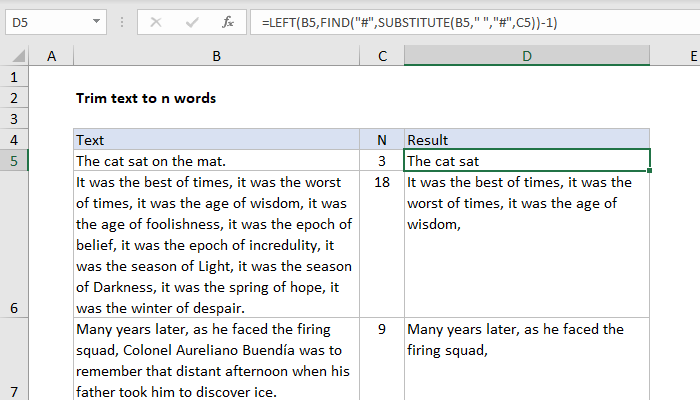 We need a way to split text at a certain marker that corresponds to a certain number of words. Excel doesn't have a built-in function to parse text by word, so are using the SUBSTITUTE function's "instance" argument to replace an "nth space" character with the pound sign (#), then using FIND and LEFT to discard all text after the marker.

The resulting string is returned to the FIND function, configured to look for "#".

Since the "#" is the 12th character in the text, FIND returns 12. We don't want to include the space character itself in, so we subtract 1:

LEFT returns the final result from the formula, "The cat sat".

Note: the pound character ("#") is arbitrary and can be replaced with any character that won't appear in the text.

Add elipses or other character

To add "..." to the end of the trimmed text, use concatenation like this:

Split text string at specific character
The first formula uses the FIND function to locate the underscore(_) in the text, then we subtract 1 to move back to the "character before the special character". FIND ( "_" , B5 ) - 1 In this example , FIND returns 7, so we end up with 6...

Split text and numbers
Overview The formula looks complex, but the mechanics are in fact quite simple. As with most formulas that split or extract text, the key is to locate the position of the thing you are looking for. Once you have the position, you can use other...

Split dimensions into two parts
Background A common annoyance with data is that it may be represented as text instead of numbers. This is especially common with dimensions, which may appear in one text string that includes units, for example: 50 ft x 200 ft 153 ft x 324 ft Etc. In...

Get first word
FIND returns the position (as a number) of the first occurrence of a space character in the text. This position, minus one, is fed into the LEFT function as num_chars. The LEFT function then extracts characters starting at the the left side of the...

Get last word
This formula is an interesting example of a "brute force" approach that takes advantage of the fact that TRIM will remove any number of leading spaces. Working from the inside out, we use the SUBSTITUTE function to find all spaces in the text, and...

Split text with delimiter
The gist of this formula is to replace a given delimiter with a large number of spaces using SUBSTITUTE and REPT, then use the MID function to extract text related to the "nth occurrence" and the TRIM function to get rid of the extra space. In this...
Related functions

Get over 200 Excel shortcuts for Windows and Mac in one handy PDF.

Thanks! Y'all do a really good job explaining things and giving examples! -Mark