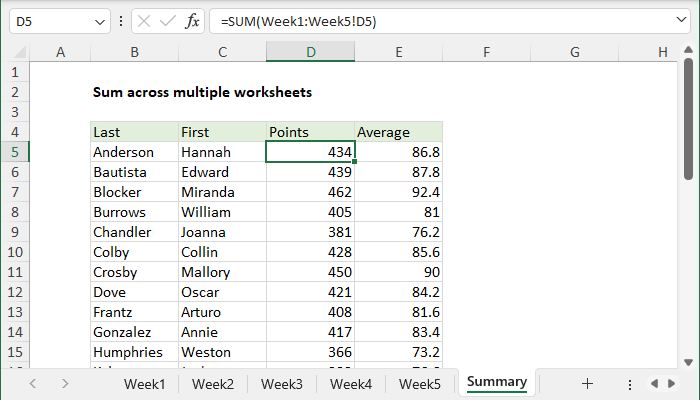 To sum the same range in one or more sheets, you can use the SUM function with a special syntax called a "3D reference". In the example shown, the formula in D5 is:

The result in the sum of values in cell D5 in all five worksheets.

In this example, the goal is to sum total points for each student across five worksheets that all have the same structure. This can be accomplished with a 3D reference, as explained below.

Before we look at how 3D references work, let's look at the a standard approach. To solve this problem with a standard cell reference, you can input each reference manually like this:

Alternately, you can provide the five references above to the SUM function like this:

Both formulas return a correct result. However, the formulas are unwieldy and will become more complex as the number of sheets increases. A better approach is a 3D reference.

Note that a colon (:) separates the first worksheet from the last worksheet. To refer to cell A1 in these worksheets, add an exclamation mark (!) and the cell reference like this:

The formula above is the equivalent of three separate references:

In the example shown, we want to sum total points for each person across five worksheets, Week1 through Week5. In the Summary sheet, the formula in cell D5, copied down, is:

This formula is equivalent to the following long-hand formula:

Note: when using 3D references, it is important that all sheets have exactly the same structure. In the example shown, the five sheets being referenced all have the same layout as Week1 below: 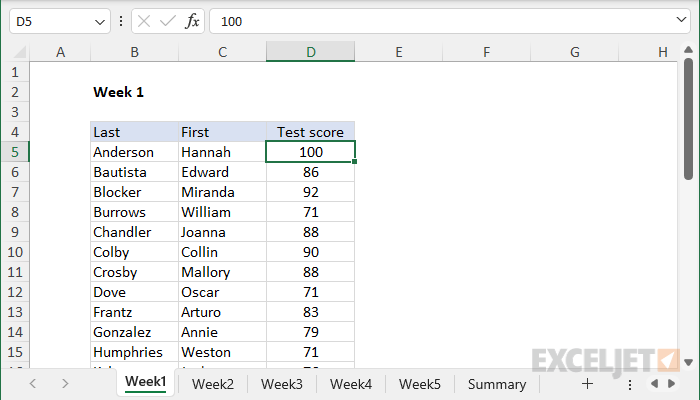 You can use a 3D reference with other functions as well. In the example shown, the formula to average scores in cell E5 is:

The result in cell E5 is 86.8, the average of cell D5 in the five worksheets being referenced.

You can use 3D references in other functions as well. For example:

Sum across multiple worksheets with criteria
In this example, the goal is to sum hours per project across three different worksheets: Sheet1, Sheet2, and Sheet3. The data on each of the three sheets has the same structure as Sheet1, as seen below: 3D reference won't work Before we look at a...
Related functions