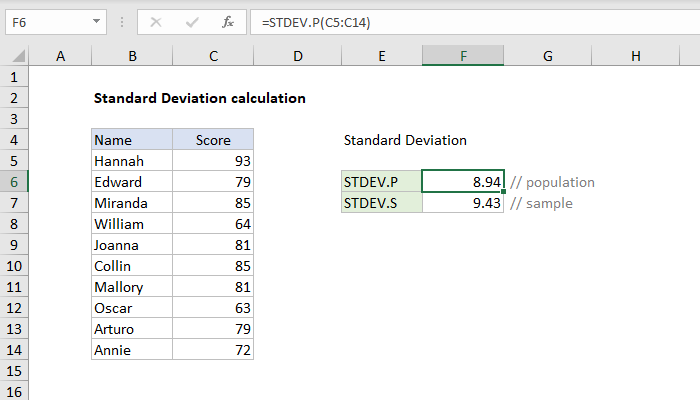 To calculate the standard deviation of a data set, you can use the STEDV.S or STEDV.P function, depending on whether the data set is a sample, or represents the entire population. In the example shown, the formulas in F6 and F7 are:

Standard deviation is a measure of how much variance there is in a set of numbers compared to the average (mean) of the numbers. To calculate standard deviation in Excel, you can use one of two primary functions, depending on the data set. If the data represents the entire population, you can use the STDEV.P function. IF the data is just a sample, and you want to extrapolate to the entire population, you can use the STDEV.S function to correct for sample bias as explained below. Both functions are fully automatic.

In the context of Excel and standard deviation, the key thing to know is:

When should you use STDEV.S, which includes Bessel’s correction? It depends.

Remember that a small sample is not likely to be a good approximation of a population in most cases. On the other hand, a large enough sample size will approach the statistics produced for a population. In these cases, Bessel’s correction may not be useful.

The screen below shows how to manually calculate standard deviation in Excel. 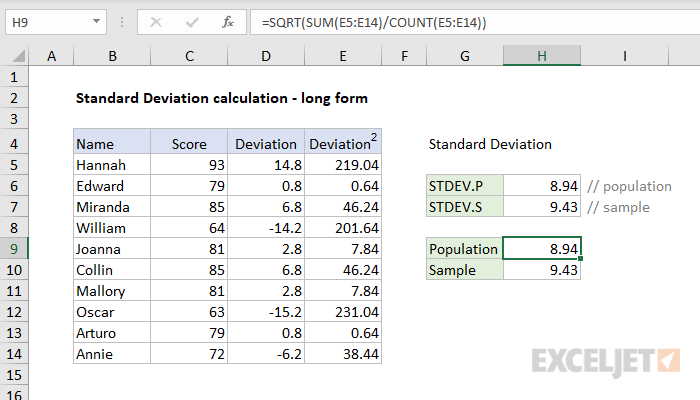 Column D calculates Deviation, which the value minus mean. The formula in D5, copied down is:

Column E shows deviations squared. The formula in E5, copied down is:

In H5 we calculate standard deviation for the population with this formula:

In H6 we calculate standard deviation for a sample with a formula that uses Bessel’s correction:

You may notice that Excel contains older functions, STDEVP and STDEV which also calculate standard deviation. In short:

Although STDEVP and STDEV still exist for backwards compatibility, Microsoft recommends that people use the newer STDEV.P and STDEV.S functions instead.

Average numbers
AVERAGE is an automatic function in Excel. In most cases, you'll supply a range of cells to average, and the function will return the result. However, you can also supply individual arguments to the function, in cases where cells are non-adjacent...

The STDEVP function calculates the standard deviation for data that represents a population. STDEVP has been replaced with a newer function called STDEV.P, which has the same behavior.