Round a number down 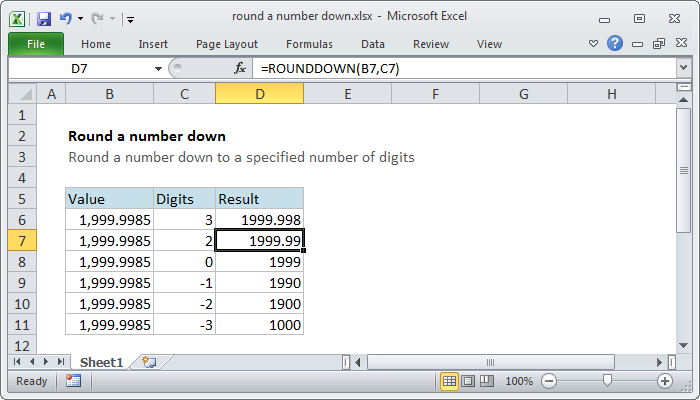 To round a number to round down, regardless of its value, you can use the ROUNDDOWN function with a specified number of digits. In the example shown, the formula in cell D7 is

In the example shown, the formula in cell D7 is

In the table, the ROUNDDOWN function is used to round the same number (1999.9985) to a decreasing number of digits, starting at 2 and moving down past zero to -3. Note that positive numbers round to the right of the decimal point, while digits specified less than or equal to zero round to the left. At each step, numbers that would normally be rounded up are rounded down.

You can see that ROUNDDOWN is a rather heavy handed function, so use it carefully. You can use the FLOOR function to round a number down to a given multiple. If you want to discard the decimal portion of a number, you can use the TRUNC function.

The Excel ROUNDDOWN function returns a number rounded down to a given number of places. Unlike standard rounding, where only numbers less than 5 are rounded down, ROUNDDOWN rounds all numbers down.