Round a number up 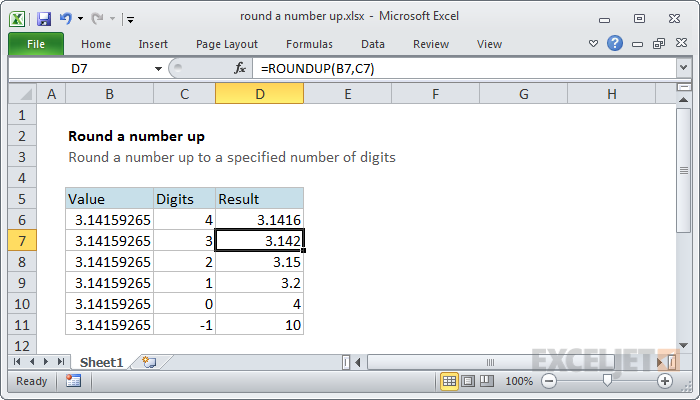 To round a number to round up, regardless of its value, you can use the ROUNDUP function with a given number of digits. In the example shown, the formula in cell D7 is:

In the example, the formula in cell D7 is

This tells Excel to take the value in B7 (PI) and round it to the number of digits in cell C7 (3) with a result of 3.142 Notice that even though the number in the 4th position to the right of the decimal is 1, it is still rounded up to 2.

In the table, the ROUNDUP function is used to round the same number (pi, created with the PI function) to a decreasing number of digits, starting at 4 and moving down past zero to -1. Note that positive numbers round to the right of the decimal point, while digits less than or equal to zero round to the left.

You can see that ROUNDUP is a rather heavy-handed function, so use with care. You can use the CEILING function to round a number up to a given multiple. If you want to discard the decimal portion of a number, you can use the TRUNC function.

Just wanted to say thanks for sharing useful Excel tips online. There are so many websites that provide Excel tips online, but this is my go-to as your examples and explanations are easy to understand.
Amy
END_OF_DOCUMENT_TOKEN_TO_BE_REPLACED