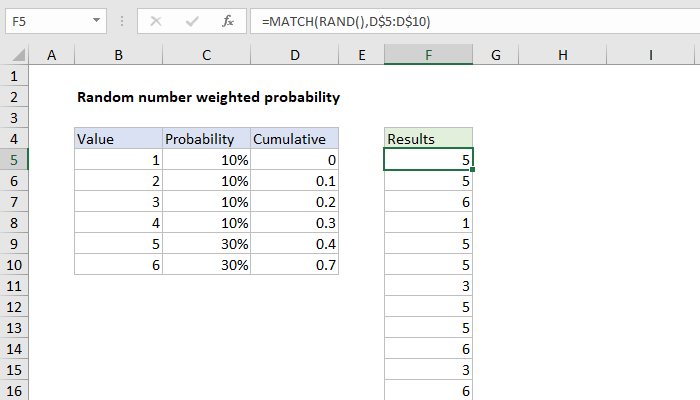 To generated a random number, weighted with a given probability, you can use a helper table together with a formula based on the RAND and MATCH functions.

This formula relies on the helper table visible in the range B4:D10. Column B contains the six numbers we want as a final result. Column C contains the probability weight assigned to each number, entered as a percentage. Column D contains the cumulative probability, created with this formula in D5, copied down:

Notice, we are intentionally shifting the cumulative probability down one row, so that the value in D5 is zero. This is to make sure MATCH is able to find a position for all values down to zero as explained below.

To generate a random value, using the weighted probability in the helper table, F5 contains this formula, copied down:

Inside MATCH, the lookup value is provided by the RAND function. RAND generates a random value between zero and 1. The lookup array is the range D5:D10, locked so it won't change as the formula is copied down the column.

The third argument for MATCH, match type, is omitted. When match type is omitted, MATCH will return the position of the largest value less than or equal to the lookup value*. In practical terms, this means the MATCH function travels along the values in D5:D10 until a larger value is encountered, then "steps back" to the previous position. When MATCH encounters a value larger than the largest last value in D5:D10 (.7 in the example), it returns the last position (6 in the example). As mentioned above, the first value in D5:D10 is deliberately zero to ensure that values below .1 are "caught" by the lookup table and return a position of 1.

*Values in the lookup range must be sorted in ascending order.

To return a random weighted text value (i.e. a non-numeric value), you can enter text values in the range B5:B10, then add INDEX to return a value in that range, based on the position returned by MATCH:

Random number between two numbers
The Excel RANDBETWEEN function returns a random integer between given numbers. RANDBETWEEN is a volatile function recalculates when a worksheet is opened or changed. In the example shown, the formula in B5 is: = RANDBETWEEN ( 1 , 100 ) This formula...

Randomly assign data to groups
The RANDBETWEEN function generates random numbers between two integers. The CHOOSE function takes a number as the first argument, and uses that number to select the "nth" item from the following arguments. So, in this formula, RANDBETWEEN generates...

Random value from list or table
Note: this formula uses the named range "data" (B5:E104) for readability and convenience. If you don't want to use a named range, substitute $B$5:$E$104 instead. To pull a random value out of a list or table, we'll need a random row number. For that...
Related functions