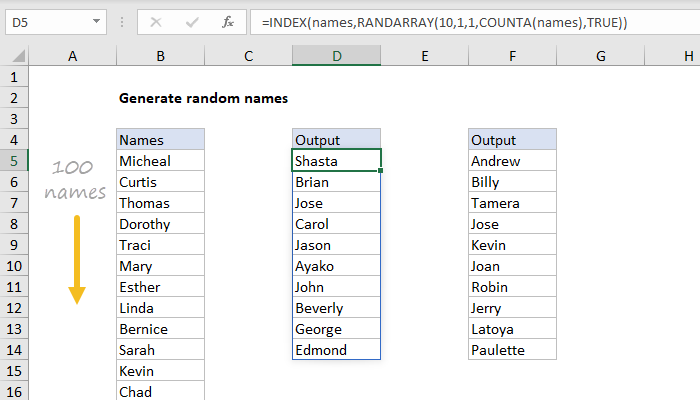 To create a random list of names, you can use the INDEX function and the RANDARRAY function to select random names from an existing list. In the example shown, the formula in D5 is:

which returns 10 random values from the named range names (B5:B104).

At the core, this formula uses the INDEX function to retrieve 10 random names from a named range called names which contains 100 names. For example, to retrieve the fifth name from the list, we use INDEX like this:

However, the trick in this case is that we don't want a single name at a known location, we want 10 random names at unknown locations between 1 and 100. This is an excellent use case for the RANDARRAY function, which can create a random set of integers in a given range. Working from the inside out, we use RANDARRAY to get 10 random numbers between 1 and 100 like this:

The COUNTA function is used to get a dynamic count of names in the list, but we could replace COUNTA with a hardcoded 100 in this case with the same result:

In either case, RANDARRAY will return 10 numbers in an array that looks like this:

Note: these numbers are random only and do not map directly to the example shown.

This array is returned directly to the INDEX function as the row argument:

Because we are giving INDEX 10 row numbers, it will 10 results, each corresponding to a name at the given position. The 10 random names are returned in a spill range beginning in cell D5.

Note: RANDARRAY is a volatile function and will recalculate every time the worksheet is changed, causing values to be resorted. To stop values from sorting automatically, you can copy the formulas, then use Paste Special > Values to convert formulas to static values.

Here, the SORTBY function is used to sort the list of names randomly with an array values created by the RANDARRAY function, as explained in more detail here.

Finally, we need to retrieve 10 values. Because we already have names in a random order, we can simply request the first 10 with an array created by the SEQUENCE function like this:

which is returned to the INDEX function as the row argument. INDEX then returns the first 10 names in a spill range like the original formula.

Note: for a more detailed explanation of random numbers without duplicates, see this example.

Sort by custom list
In this example, we are sorting a table with 10 rows and 3 columns. In the range J5:J7 (the named range custom ), the colors "red", "blue", and "green" are listed in the desired sort order. The goal is to sort the table using values in the Group...

Sort by random
The SORTBY function allows sorting based on one or more "sort by" arrays, as long as they have dimensions that are compatible with the data being sorted. In this example, there are 10 values being sorted, the first 10 letters of the alphabet. To...

The Excel RANDARRAY function generates an array of random numbers between. The size or the array is is specified by rows and columns arguments. Generated values can be either decimals or whole numbers.