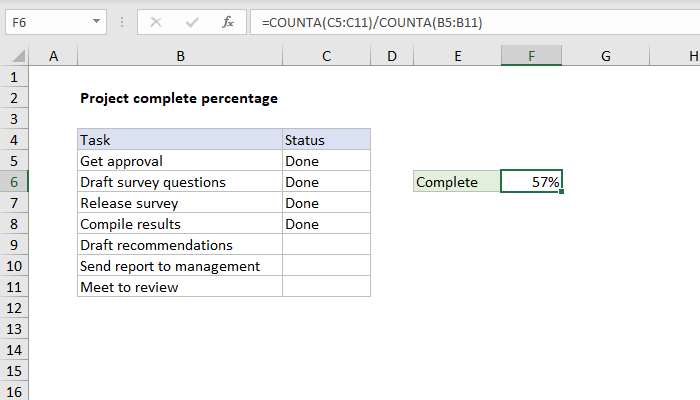 To calculate the percentage complete for a project with a list of tasks, you can use a simple formula based on the COUNTA function. In the example shown, the formula in F6 is:

In this example if a task is marked "Done", then it is considered complete. The goal is to calculate the percent complete for the project by showing the ratio of complete tasks to total tasks, expressed as a percentage. The formula in F6 is:

At the core, this formula simply divides tasks complete by the total task count:

which is then formatted as a percentage. To count completed tasks, we count non-blank cells in the range C5:C11 with the COUNTA function:

Unlike the COUNT function, which counts only numeric values, COUNTA will count cells that include numbers or text.

To count total tasks, we count non-blank cells in the range C5:C11, again with COUNTA:

After COUNTA runs, we can simply the formula to: