Get work hours between dates and times 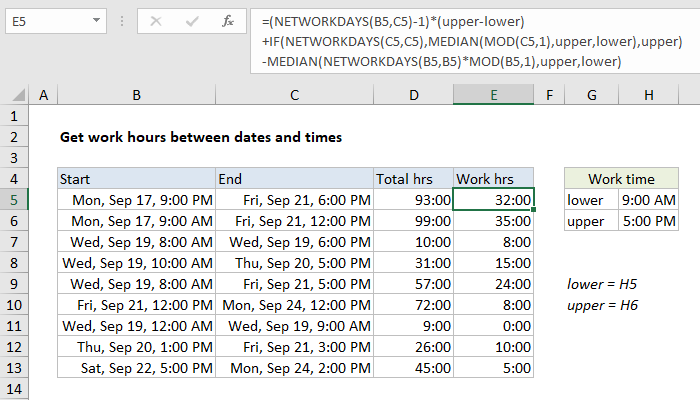 To calculate total work hours between two dates and times, you can use a formula based on the NETWORKDAYS function. In the example shown, E5 contains this formula:

Note: this example was inspired by a formula challenge on Chandoo, and a more complete solution provided by formula master Barry Houdini on the MrExcel forum.

The NETWORKDAYS function handles the exclusion of weekends and holidays (when provided as a range of dates). You can switch to NETWORKDAYS.INTL if your schedule has non-standard working days.

The result is a number which represents total hours. Like all Excel times, you will need to format the output with a suitable number format. In the example shown, we are using:

The square brackets stop Excel from rolling over when hours are greater than 24. In other words, they make it possible to display hours greater than 24. If you need a decimal value for hours, you can multiply the result by 24 and format as a regular number.

If start and end times will always occur between lower and upper times, you can use a simpler version of this formula:

No start time and end time

To calculate total work hours between two dates, assuming all days are full workdays, you can use an even simpler formula:

Add business days to date
If you need to add or subtract business days (workdays) to a date so that you can calculate a date in the future or past that skips weekends (and holidays), you can use the WORKDAY function. Holidays are optional. In the example, the formula in D6...

Get work hours between dates
To calculate the total number of work hours between two dates, you can use a formula based on the NETWORKDAYS function, where "start" is the start date, "end" is the end date, "holidays" is a range that includes dates, and "hours" is the number of...

The Excel NETWORKDAYS function calculates the number of working days between two dates. NETWORKDAYS automatically excludes weekends (Saturday and Sunday) and can optionally exclude a list of holidays supplied as dates.

The Excel NETWORKDAYS.INTL function calculates the number of working days between two dates. NETWORKDAYS.INTL excludes Saturday and Sunday by default, but provides a way to specify which days of the week are considered weekends.  The function can...

Thank you, and thank you so very much for your videos, they are sooooo helpful. -Elizabeth