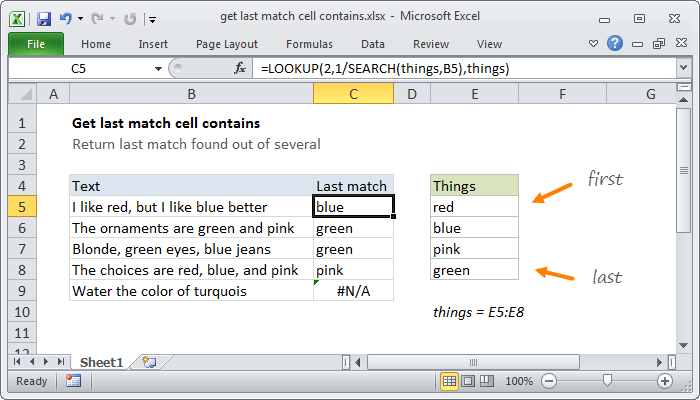 Context: you have a list of things in the named range "things" (E5:E8), and you want to check cells in column B to see if they contain these things. If so, you want to return the last item from"things" that was found.

In this formula, the SEARCH function is used to search cells in column B like this:

This array serves as the "lookup_vector" for the LOOKUP function. The lookup value is supplied as the number 2, and the result vector is the named range "things". This is the clever part.

The formula is constructed in such a way so that the lookup vector will never contain a value larger than 1, while the the lookup value is 2. This means the lookup value will never be found. In this case, LOOKUP will match the last numeric value found in the array, which corresponds to the last "thing" found by SEARCH.

Cell contains one of many things
The goal of this example is to test each cell in B5:B14 to see if it contains any of the strings in the named range things (E5:E7). These strings can appear anywhere in the cell, so this is a literal "contains" problem. The formula in C5, copied...

Value exists in a range
The COUNTIF function counts cells that meet supplied criteria, returning the number of occurrences found. If no cells meet criteria, COUNTIF returns zero. Any positive number means the value was found. This means you can use the greater than...

Cell contains which things
In this example the goal is to check a cell for several things at once, and return a comma separated list of the things that were found. In other words, we want check for the colors seen in column E and list the colors found in column C. The formula...

Get first match cell contains
In this example, we have a list of of colors in a named range called "things" (E5:E9). We want to check the text in column B to see if it contains any of these colors. If so, we want to return the name of the first color found. Working from the...
Related functions