Get integer part of a number 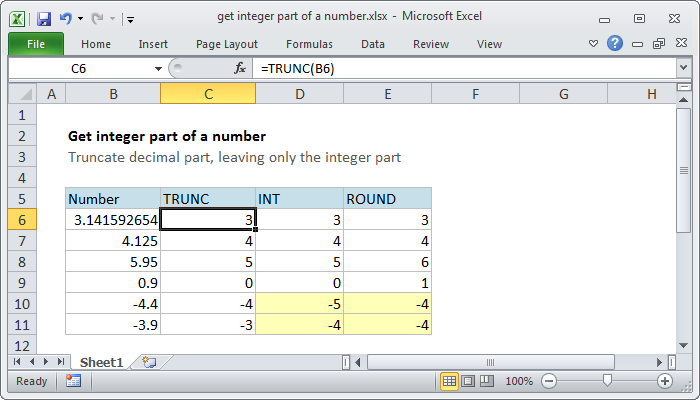 To remove the decimal part of a number and return only the integer portion, you can use the TRUNC function to slice off the decimal. In the example, cell C6 contains this formula:

The TRUNC function simply truncates (i.e. removes) numbers; it doesn't not round at all.

With TRUNC, no rounding takes place. The TRUNC function simply slices off the decimal part of the number with default settings.

TRUNC actually takes an optional second argument to specify the precision of truncation, but when you don't supply this optional argument, it is assumed to be zero, and truncation happens at the decimal.

What about INT or ROUND?

You might wonder if you can use INT function, or the ROUND function instead.

The behavior of INT is identical to TRUNC (with default settings) for positive numbers — the INT function will round a number down to the next integer and then return only the integer portion of the number.

However, for negative numbers, the rounding that INT does is a bit strange. This is because INT rounds negative numbers down away from zero, no matter what the decimal value. See the last 2 examples in the screen above for an example. Because of this behavior, TRUNC is a safer option if you want the original integer portion of a number.

As you would expect, the ROUND function rounds numbers down. If you want to round to the nearest integer, (positive or negative) use:

But be aware that the integer value may be different than the number you started with due to rounding. As above, TRUNC is a safer option if you want the original integer portion of a number.

Extract date from a date and time
Excel handles dates and time using a scheme in which dates are serial numbers and times are fractional values . For example, June 1, 2000 12:00 PM is represented in Excel as the number 36678.5, where 36678 is the date portion and .5 is the time...
Related functions

The Excel INT function returns the integer part of a decimal number by rounding down to the integer. Note that negative numbers become more negative. For example, while INT(10.8) returns 10, INT(-10.8) returns -11.