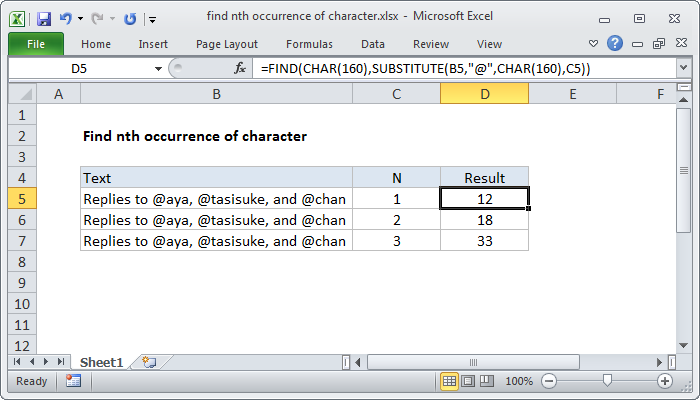 To find the nth occurrence of a character in a text string, you can use a formula based on the FIND and SUBSTITUTE functions. In the example shown, the formula in D5 is:

In this example we are looking for the nth occurrence of the "@" character.

Working from the inside out, we first use the SUBSTITUTE function to replace the nth occurrence of "@" with CHAR(160):

The SUBSTITUTE function has an optional 4th argument called instance number that can be used to specify the instance that should be replaced. This number comes from column C.

SUBSTITUTE then replaces the nth occurrence of "@" with CHAR(160), which resolves to "†". We use CHAR(160) because it won't normally appear in text. You can use any character you know won't exist in the text. For a demo of the CHAR function, see this video.

Finally, the FIND character looks for CHAR(160) and returns the position.

Note: I developed this example on a Mac originally, where CHAR(160) resolves to a dagger (†). On Windows, use CHAR(134) for a dagger character.

Replace one character with another
The SUBSTITUTE function is full automatic. All you need to do is supply "old text" and "new text". SUBSTITUTE will replace every instance of the old text with the new text. If you need to perform more than one replacement at the same time, you'll...

Extract last two words from cell
At the core, this formula uses the MID function to extract characters starting at the second to last space. The MID function takes 3 arguments: the text to work with, the starting position, and the number of characters to extract. The text comes...
Related functions

I am very happy with contents in your emails. I hope to receive many valuable lessons from you in the future. -Trankham