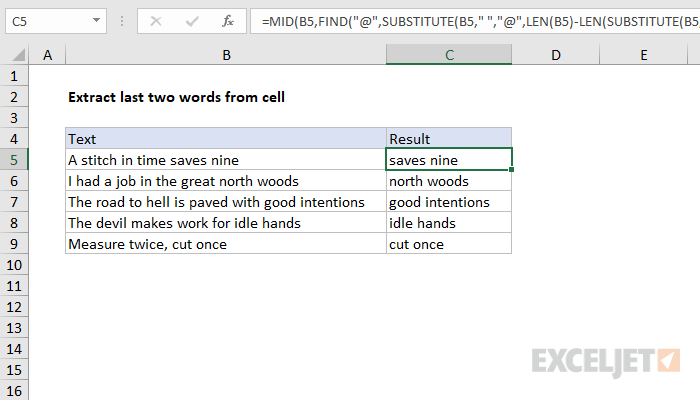 To extract the last two words from a cell, you can use a formula built with several Excel functions, including MID, FIND, SUBSTITUTE, and LEN. In the example shown, the formula in C5 is:

The text comes from column B, and the number of characters can be any large number that will ensure the last two words are extracted. The challenge is to determine the starting position, which is just after the second to last space. The clever work is done primarily with the SUBSTITUTE function, which has an optional argument called instance number. This feature is used to replace the second to last space in the text with the "@" character, which is then located with the FIND function.

Working from the inside out, the snippet below figures out how many spaces are in the text total, from which 1 is subtracted.

In the example shown, there are 5 spaces in the text, so the code above returns 4. This number is fed into the outer SUBSTITUTE function as instance number:

This causes SUBSTITUTE to replace the fourth space character with "@". The choice of @ is arbitrary. You can use any character that will not appear in the original text.

Next, the FIND locates the "@" character in the text:

The result of FIND is 17, to which 1 is added to get 18. This is the starting position, and goes into the MID function as the second argument. For simplicity, the number of characters to extract is hardcoded as 100. This number is arbitrary and can be adjusted to fit the situation.

This formula can be generalized to extract the last N words from a cell by replacing the hardcoded 1 in the example with (N-1). In addition, if you are extracting many words, you may want to replace the hardcoded argument in MID, 100, with a larger number. To guarantee you the number is large enough, you could simply use the LEN function as follows:

I wanted to thank you for your site. I used it heavily when I started working at internships in college and I am now a PhD student who still finds her way back on the site for help. I really appreciate how straightforward and helpful your content is.
Melissa
END_OF_DOCUMENT_TOKEN_TO_BE_REPLACED