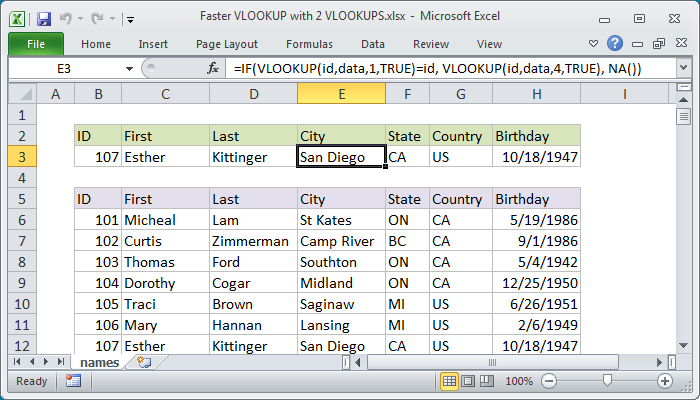 With large sets of data, exact match VLOOKUP can be painfully slow, but you can make VLOOKUP lightening fast by using two VLOOKUPS, as explained below.

Exact match is set by supplying FALSE or zero as the forth argument:

The reason VLOOKUP in this mode is slow is because it must check every single record in the data set until a match is found. This is sometimes referred to as a linear search.

(VLOOKUP defaults to true, which is a scary default, but that's another story).

With very large sets of data, changing to approximate-match VLOOKUP can mean a dramatic speed increase.

So, no-brainer, right? Just sort the data, use approximate match, and you're done.

The problem with VLOOKUP in "approximate match" mode is this: VLOOKUP won't display an error if the lookup value doesn't exist. Worse, the result may look completely normal, even though it's totally wrong (see examples). Not something you want to explain to your boss.

The solution is to use VLOOKUP twice, both times in approximate match mode:

The first instance of VLOOKUP simply looks up the lookup value (the id in this example):

and returns TRUE only when the lookup value is found. In that case,
the formula runs VLOOKUP again in approximate match mode to retrieve a value from that table:

There's no danger of a missing lookup value, since the first part of the formula already checked to make sure it's there.

If the lookup value isn't found, the "value if FALSE" part of the IF function runs, and you can return any value you like. In this example, we use NA() we return an #N/A error, but you could also return a message like "Missing" or "Not found".

Remember: you must sort the data by lookup value in order for this trick to work.

How to replace nested IFs with VLOOKUP
In this short video, we look at how to replace a typical nested IF formula with a VLOOKUP formula. Compared to nested IF statements, VLOOKUP is simpler and more transparent. It's also easier to adjust later.
See also
23 things you should know about VLOOKUP
Good links
Why 2 VLOOKUPS are better than 1 VLOOKUP (Charles Williams)

I've been using ExcelJet for a couple years now as a pocket resource, and I just wanted to thank you. Your site is well laid out, consistent, and nearly all-encompassing. I go elsewhere for VBA matters, I'll admit, but ExcelJet is the supreme resource for the beginner and intermediate Excel user. I recommend it to coworkers quite frequently. -Nate