Double quotes inside a formula 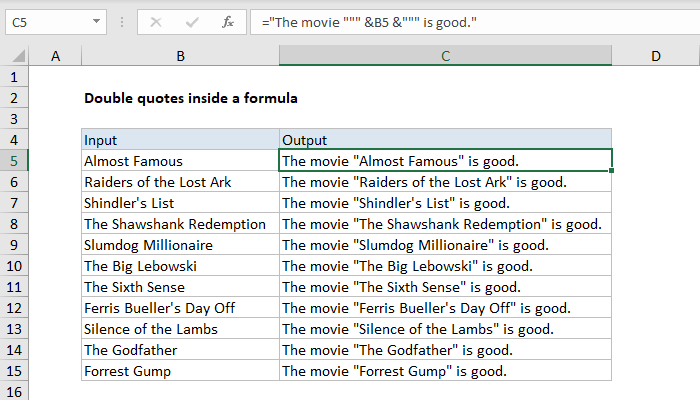 To include double quotes inside a formula, you can use additional double quotes. In the example shown, the formula in C5 is:

For example, if cell A1 contains the text: The Graduate and you want wrap that text inside double quotes (""), you can use this formula:

Because the text on either side of A1 consists of only of a double quote, you need """" . The outer quotes (1 & 4) tell Excel this is text, the 2nd quote tells Excel to escape the next character, and the 3rd quote is displayed.

If you want to add the movie to other text to create, you can concatenate the movie title inside double quotes with a formula like this:

Working with extra double quotes can get confusing fast, so another way to do the same thing is to use the CHAR function with the number 34:

In this case, CHAR(34) returns the double quote character (") which is included in the result as literal text.

CHAR is handy for adding other text that is hard to work with in a formula as well. You can use CHAR(10) to insert a line break character into a formula on Windows. On a Mac, use CHAR(13):

Add a line break with a formula
This formula "glues together" the pieces of text that appear in B4, C4, and D4 using the ampersand (...
Related functions