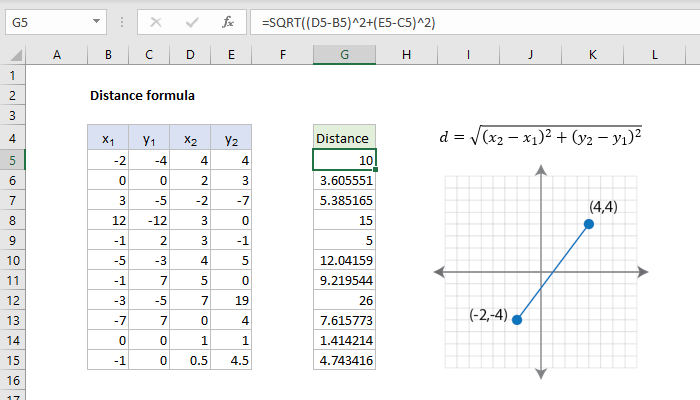 To compute the length of a 2D line given the coordinates of two points on the line, you can use the distance formula, adapted for Excel's formula syntax. In the example shown, the formula in G5, copied down, is:

where the coordinates of the two points are given in columns B through E.

The length of a line can be calculated with the distance formula, which looks like this:

In Excel, the distance formula can be written with the exponent operator (^) and the SQRT function like this:

Following Excel's order of operations, the change in x and the change in y is calculated, then squared, and the two results are added together and delivered to the SQRT function, which returns the square root of the sum as a final result:

The POWER function can also be used instead of the exponent operator (^) like this:

with the same result.

Area of a circle
In geometry, the area enclosed by a circle with radius (r) is defined by the following formula: πr 2 The Greek letter π ("pi") represents the ratio of the circumference of a circle to its diameter. In Excel, π is represented in a formula with the PI...

Area of a triangle
In geometry, the area enclosed by a triangle is defined by this formula: where b represents the base of the triangle, and h represents the height, measured at right angles to the base. In Excel, the same formula can be represented like this: A = b...

The Excel SQRT function returns the square root of a positive number. SQRT returns an error if number is negative.