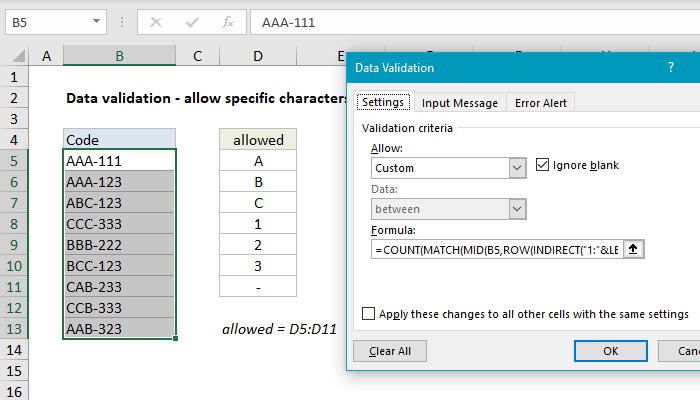 To use data validation to allow a list of specific characters only, you can use a rather complicated array formula based on the COUNT, MATCH, and LEN functions. In the example shown, data validation is applied with this formula:

Working from the inside out, the MID function is used to generate an array from text entered in B5 with this snippet:

explained in detail here. The result is an array like this:

which goes into MATCH as the lookup value. For lookup array, we use the named range "allowed", concatenated to an empty string (""):

The concatenation converts any numbers to strings, so that we are matching apples-to-apples. The result is an array like this:

The last argument in MATCH, match_type is set to zero to force an exact match. Because we give MATCH multiple lookup values, we get back an array with multiple results:

Each number in this array represents a match. In the event a match isn't found for a character, the array will contain a #N/A error.

Finally, the COUNT function is used count the numbers in the result array, which is compared to a count of all characters in the cell calculated with the LEN function. When MATCH finds a match for all characters, the counts are equal, the formula returns TRUE, and data validation succeeds. If MATCH doesn't find a match any character, it returns #N/A instead of a number. In that case, the counts don't match and data validation fails.

Note: this formula relies on brute force to get the job done. If you have a better approach, please leave a comment below.

The Excel COUNT function returns the count of values that are numbers, generally cells that contain numbers. Values can be supplied as constants, cell references, or ranges.

First just wanted to say what a fantastic website and resource you have created. I only stumbled on it a few months ago but recommend it to anyone I come across with an interest in Excel (and who wouldn't love Excel!) -DH