Count specific words in a range 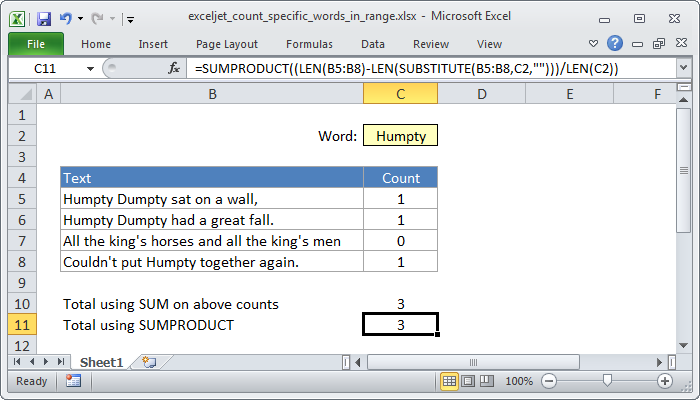 To count how many times a specific a word (or any substring) appears inside a range of cells, you can use a formula based on the SUBSTITUTE, LEN, and SUMPRODUCT functions. In the example shown, the formula in C11 is:

Note: The formula on this page counts instances of a word in a range. For example, if a cell contains two instances of a word, it will contribute 2 to the total count. If you just want to count cells that contain a specific word, see this simple formula based on the COUNTIF function.

In the generic version of the formula, rng represents the range to check, and txt is the word or substring to count.

In the example shown, B5:B8 is the range to check, and C2 contains the text (word or substring) to count.

Because the above calculation is wrapped in the SUMPRODUCT function, the result is an array that contains a number for each cell in the range. These numbers represent the number of occurrences of the substring in each cell. For this example, the array looks like this: {1;1;0;1}

Finally, SUMPRODUCT sums together all items in the array to get the total occurrences of substring in the range of cells.

SUBSTITUTE is a case-sensitive function, so it will match case when running a substitution. If you need to count both upper and lower case occurrences of a word or substring, use the UPPER function inside SUBSTITUTE to convert the text to uppercase before running the substitution:

Count specific words in a cell
B4 is the cell we're counting words in, and C4 contains the substring (word or any substring) you are counting. SUBSTITUTE removes the substring from the original text and LEN calculates the length of the text without the substring. This number is...
Related functions

The Excel UPPER function converts a text string to all uppercase letters. Numbers, punctuation, and spaces are not affected.