Count cells that contain either x or y 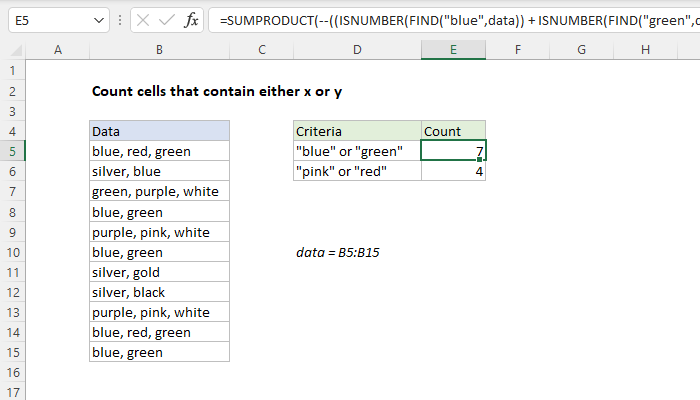 To count cells that contain either x or y, you can use a formula based on the SUMPRODUCT function. In the example shown, the formula in cell F5 is:

For a single formula, you can use SUMPRODUCT with ISNUMBER + FIND. The formula in F5 is:

This formula is based on the formula explained here that locates text inside of a cell:

When given a range of cells, this snippet will return an array of TRUE/FALSE values, one value for each cell the range. Since we are using this twice (once for "abc" and once for "def"), we'll get two arrays.

Next, we add these arrays together (with +), which creates a new single array of numbers. Each number in this array is the result of adding the TRUE and FALSE values in the original two arrays together. In the example shown, the resulting array looks like this:

We need to add these numbers up, but we don't want to double count. So we need to make sure any value greater than zero is just counted once. To do that, we force all values to TRUE or FALSE with ">0", then force to 1/0 with the double-negative (--).

Finally, SUMPRODUCT returns the sum of all values in the  array.

With a helper column to check each cell individually, the problem is less complex. We can use COUNTIF with two values (provided as an "array constant"). The formula in C5 is:

COUNTIF will return an array that contains two items: a count for "abc" and a count for "def". To prevent double counting, we add the items up and then force the result to TRUE/FALSE with ">0". Finally, we convert the TRUE/FALSE values to 1's and 0's with a double negative (--).

The final result is either 1 or 0 for each cell. To get a total for all cells in the range, simply sum the helper column.

Count cells equal to this or that
In this example, the goal is to count cells in the range D5:D15 that contain "red" or "blue". For convenience, the D5:D15 is named color . Counting cells equal to this OR that is more complicated than it first appears because there is no built-in...
Related functions