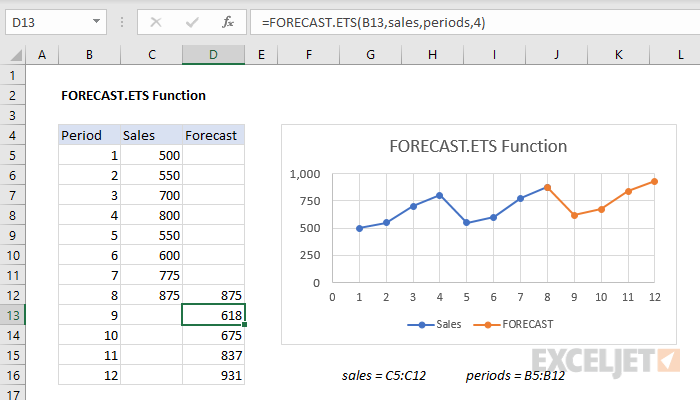 The Excel FORECAST.ETS function predicts a value based on existing values that follow a seasonal trend. FORECAST.ETS can be used to predict numeric values like sales, inventory, expenses, etc. with a seasonal pattern.

Predict value with a seasonal trend

The FORECAST.ETS function predicts a value based on existing values that follow a seasonal trend. FORECAST.ETS can be used to predict numeric values like sales, inventory, expenses, etc. with a seasonal pattern.

In the example shown above, the formula in cell D13 is:

where sales (C5:C12) and periods (B5:B12) are named ranges. With these inputs, the FORECAST.ETS function returns 618.29 in cell D13. As the formula is copied down the table, FORECAST.ETS returns predicted values in D13:D16, using values in column B for target date.

The chart to the right shows this data plotted in a scatter plot.

Note: Cell D12 is set equal to C12 to connect the existing values to the predicted values in the chart.

The target_date argument represents the point on the timeline that a prediction should be calculated.

The values argument contains the dependent array or range of data, also called y values. These are existing historical values from which a prediction will be calculated.

The aggregation argument is optional, and controls what function is used to aggregate data points when the timeline contains duplicate values. The default is 1, which specifies AVERAGE. Other options are given in the table below.

Note: It is better to perform aggregation before using FORECAST.ETS to make forecasting as accurate as possible.

The FORECAST.ETS function will return errors as shown below.

Just a big thanks! You were the first that were able to explain Index and Match in a practical, straightforward, non-excel guru oriented way!
Jacques
END_OF_DOCUMENT_TOKEN_TO_BE_REPLACED