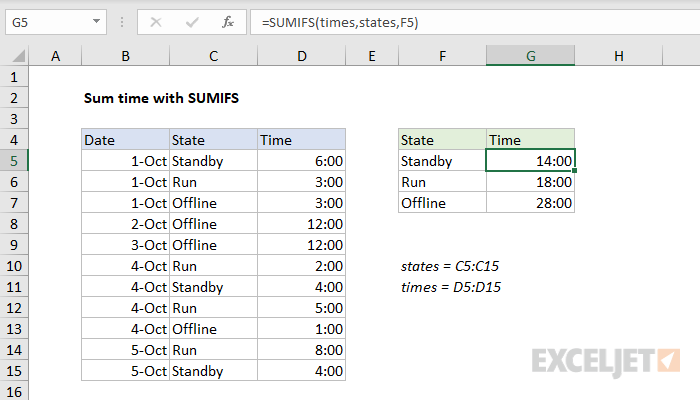 To sum time conditionally, you can use the the SUMIFS function. In the example shown, the formula in G5 is:

Excel times are numbers, and can be summed like other numeric values. In this example, F4:G7 is a summary table, showing the total time logged in each of three states: Standby, Run, and Offline. These values are hardcoded in the range F5:F7.

To sum time conditionally by each state, we are using the SUMIFS function in G5:

The reference to F5 is relative. When the formula is copied down the column, F5 changes at each new row. The two named ranges, times and states, are are fixed and do not change. In each row, SUMIFS correctly shows the total hours logged for a given state. Note when time exceeds 24 hours, you will need to use a custom time format as explained below.

With normal time formats like hh:mm, hours will "reset" to zero each 24 hours. This makes sense when the intent is to display an actual time, but it can be confusing when the total time exceeds 1 day, because hours appear to be lost.

To display time durations of more than 24 hours use a custom number format with hours in square brackets, as shown below:

For a more detailed explanation, see Sum time in Excel.

I wanted to thank you for your site. I used it heavily when I started working at internships in college and I am now a PhD student who still finds her way back on the site for help. I really appreciate how straightforward and helpful your content is.
Melissa
END_OF_DOCUMENT_TOKEN_TO_BE_REPLACED