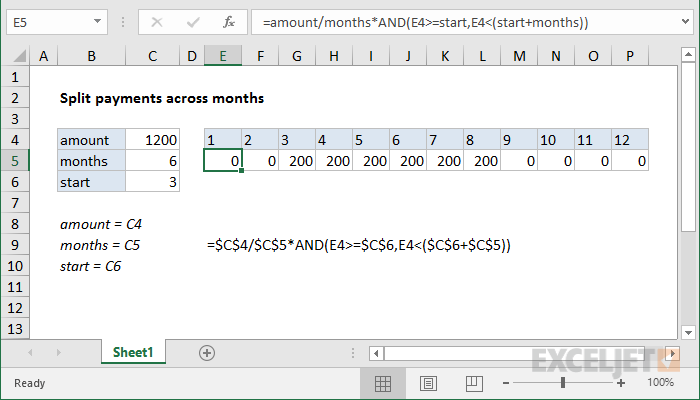 To evenly distribute a payment or other amount over a given number of months, with a variable start month, you can use a simple formula together with the AND function and a bit of boolean logic. In the example shown, the formula in E5 is:

At the core, this is a simple formula that simply divides the total amount by the number of months given:

The trick is to "cancel out" this amount in months where it doesn't apply.

To do this, we use this logical expression:

Here we use the AND function to test each month in row 4 to see if it's both greater than or equal to the given start month, and less than the end month, calculated by adding the start month to total months.

AND will return TRUE only when both conditions are TRUE, and return FALSE in another other case. This effectively zeros out calculations in months that fall outside the range of interest. This works because during math operations, FALSE is coerced to zero, and TRUE is coerced to 1.

Dave, you are an excellent teacher. I've learned so much from your videos (I'm a visual learner), and I appreciate that you provide the text/script for learners who learn best by reading. Your instructions are "pithy"/concise and the length of each video is about all I can absorb at one sitting (depending on the complexity)
Carol
END_OF_DOCUMENT_TOKEN_TO_BE_REPLACED