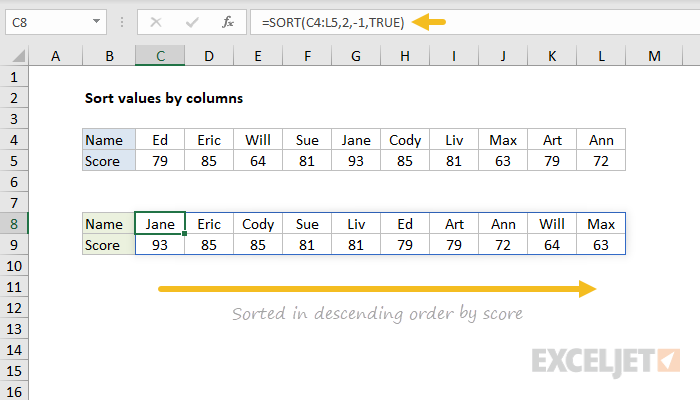 To sort values by columns, you can use the SORT function. In the example shown, data is sorted by the Group column. The formula in C8 is:

The result is the range C4:L5 sorted by score in descending order.

The SORT function sorts a range using a given index, called sort_index. Normally, this index represents a column in the source data.

However, the SORT function has an optional argument called "by_col" which allows sorting values organized in columns. To sort by column, this argument must be set to TRUE, which tells the SORT function that sort_index represents a row.

In this case, we want to sort the data by Score, which appears in the second row, so we use a sort_index of 2. The SORT function that appears in C8 is configured like this:

The SORT function returns the sorted array into the range C8:L9. This result is dynamic; if any scores in the source data change, the results will automatically update.

The SORTBY function can also be used to solve this problem. With SORTBY, the equivalent formula is:

Just wanted to say thanks for sharing useful Excel tips online. There are so many websites that provide Excel tips online, but this is my go-to as your examples and explanations are easy to understand.
Amy
END_OF_DOCUMENT_TOKEN_TO_BE_REPLACED