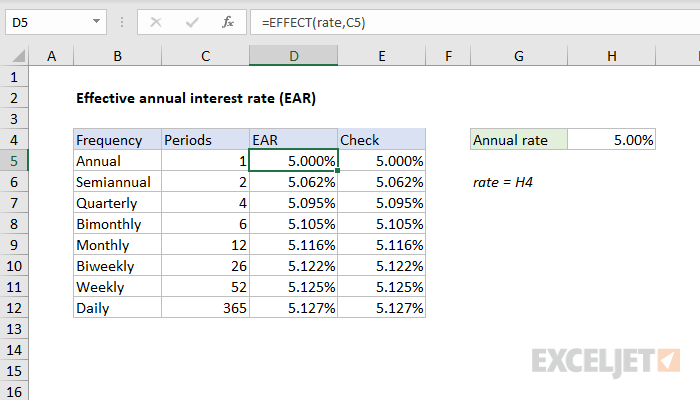 To calculate the effective annual interest rate, when the nominal rate and compounding periods are given, you can use the EFFECT function. In the example shown, the formula in D5, copied down, is:

where "rate" is the named range H4.

The Effective Annual Rate (EAR) is the interest rate after factoring in compounding. In other words, the EAR is the rate actually earned due to the effect of compounding more frequently than once a year (annually).

To demonstrate how this works, the table shown in the example is set up with various compounding periods in column C. The nominal interest rate is provided in cell H4, which is the named range "rate".

The formula in D5 is:

Because named ranges behave like absolute references, this formula can simply be copied down the table. The EFFECT function returns the calculated EAR for each of the given periods.

The generic formula for calculating EAR (in Excel formula syntax) is:

where n stands for periods, and i is the stated interest rate. This formula is used to check the results from EFFECT. In E5, the formula is:

When this formula is copied down the table, the results in columns D and E match:

Just wanted to say thanks for sharing useful Excel tips online. There are so many websites that provide Excel tips online, but this is my go-to as your examples and explanations are easy to understand.
Amy
END_OF_DOCUMENT_TOKEN_TO_BE_REPLACED