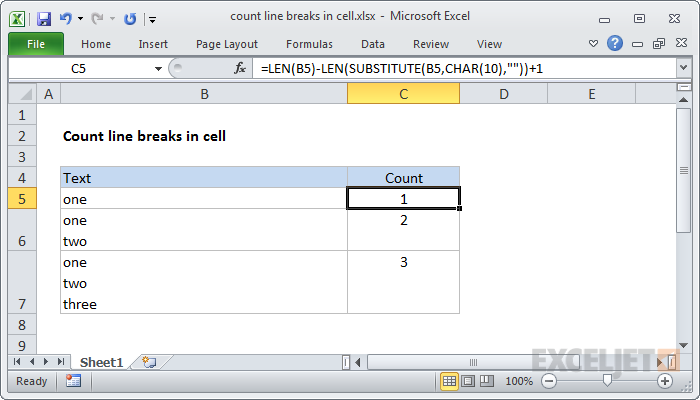 To count total lines in a cell, you can use a formula based on the LEN, SUBSTITUTE, and CHAR functions. In the example shown, the formula in C5 is:

First, the LEN function counts total characters in the cell B5.

Next SUBSTITUTE removes all "line returns" from the text in B5 by looking for CHAR(10) which is the character code for the return character in Windows. LEN returns the result inside of a second LEN, which counts characters without carriage returns.

The second count is subtracted from the first, and 1 is added to the final result, since the number of lines is the number of returns + 1.

The formula in the example shown will return 1 even if a cell is empty. If you need to guard against this problem, you can wrap the formula in IF statement like so:

On a Mac, the code for line break character is 13 instead of 10, so use this formula instead:

My Lord where have you been all my life?...I've learned more awesome tricks/functions in one afternoon from you than in the last 10 years.
Robert
END_OF_DOCUMENT_TOKEN_TO_BE_REPLACED