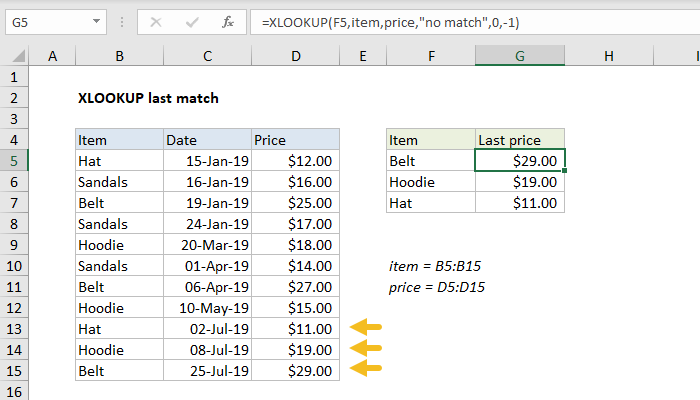 To retrieve the last match in a data set with XLOOKUP, set the fifth argument to -1. In the example shown, the formula in G5, copied down, is:

By default, XLOOKUP will return the first match in a data set. However, XLOOKUP offers an optional argument called search_mode to control the order in which data is searched. Setting search mode to -1 causes XLOOKUP to search "last to first" or, in other words, search backwards through the data. You can see this option used in the example shown. The formula in G5, copied down, is:

XLOOKUP's arguments are configured as follows:

Note: this example depends on data being sorted by date in ascending order. If data is unsorted, see this example.

XLOOKUP latest by date
XLOOKUP offers several features that make it exceptionally good for more complicated lookups. In this example, we want the latest price for an item by date . If data were sorted by date in ascending order, this would be very straightforward ...

XLOOKUP basic approximate match
In the example shown, the table in B4:C13 contains quantity-based discounts. As the quantity increases, the discount also increases. The table in E4:F10 shows the discount returned by XLOOKUP for several random quantities. XLOOKUP is configured to...

Lookup latest price
The LOOKUP function assumes data is sorted, and always does an approximate match. If the lookup value is greater than all values in the lookup array, default behavior is to "fall back" to the previous value. This formula exploits this behavior by...
Related functions

Thanks so much for the emails you send throughout the year. I really enjoy them. -Steve