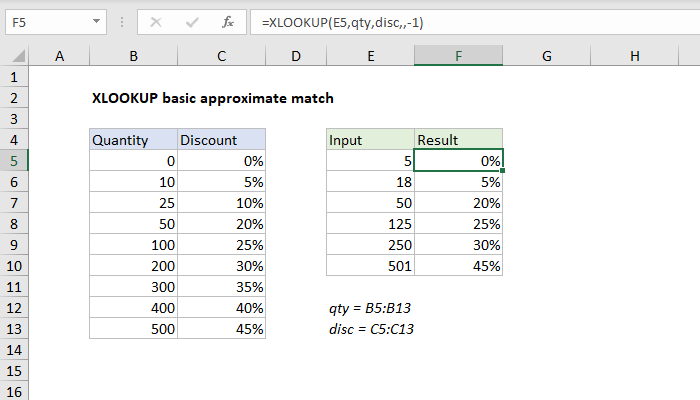 To use XLOOKUP to find an approximate match, supply the match_mode explicitly in the fourth argument. In the example shown, the formula in F5, copied down the table, is:

In the example shown, the table in B4:C13 contains quantity-based discounts. As the quantity increases, the discount also increases. The table in E4:F10 shows the discount returned by XLOOKUP for several random quantities. XLOOKUP is configured to use the quantity in column E to find the appropriate discount. The formula in F5, copied down, is:

The equivalent VLOOKUP formula for this example is either of the two formulas below:

There are several notable differences:

Basic INDEX MATCH exact
This formula uses the MATCH function to get the row position of Toy Story in the table, and the INDEX function to retrieve the value at that row in column 2. MATCH is configured to look for the value in H4 in column B: MATCH ( H4 , B5:B9 , FALSE )...
Related functions