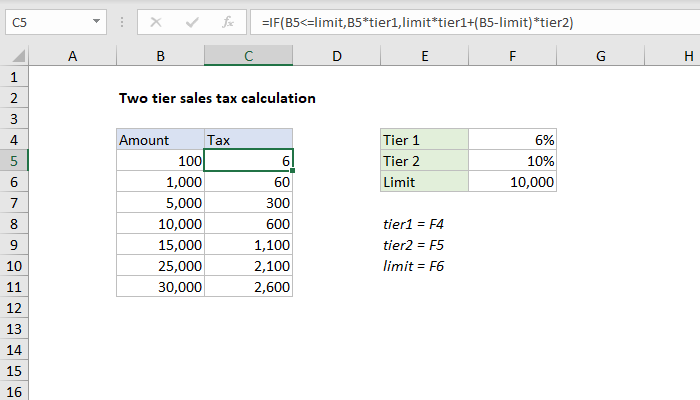 To calculate a sales tax with two tiers (brackets), you can use a basic IF formula. In the example shown, the formula in C5, copied down, is:

At the core, this formula relies on a single IF function. The logical test is based on this expression:

When B5 (the current amount) is less than the limit (10,000), the test returns TRUE and the IF function calculates a tier 1 tax only, and returns a final result with this:

However, when the amount is greater than the limit (10,000), the logical test returns TRUE. The IF function then runs an expression to calculate  tax for both tier 1 and tier 2 taxes:

Named ranges can make formulas easier to write and read. The same formula without named ranges looks like this:

References to limit, tier1, and tier2 are locked to prevent changes when the formula is copied down the table.

Basic Tax Rate calculation with VLOOKUP
To calculate a tax rate based on a simple tax rate table, you can use the VLOOKUP function. In the example shown, the formula in G5 is: = VLOOKUP ( G4 , tax_table , 2 , TRUE ) where "tax_table" is the named range C5:D8. Note: this formula determines...
Related functions

The IF function can perform a logical test and return one value for a TRUE result, and another for a FALSE result. For example, to "pass" scores above 70: =IF(A1>70,"Pass","Fail"). More than one condition can be tested by nesting IF functions....

The IF function
In this video, we'll look at how to use the IF function, one of the most powerful and popular functions in Excel...

Just a quick word of thanks for the excellent things you do with excel. It is nice and clear with easy to follow instructions. You make me look like a pro in no time. -Alasdair