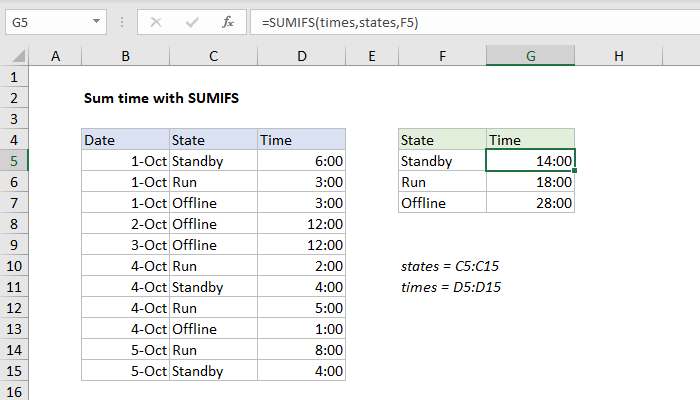 To sum time conditionally, you can use the the SUMIFS function. In the example shown, the formula in G5 is:

Excel times are numbers, and can be summed like other numeric values. In this example, F4:G7 is a summary table, showing the total time logged in each of three states: Standby, Run, and Offline. These values are hardcoded in the range F5:F7.

To sum time conditionally by each state, we are using the SUMIFS function in G5:

The reference to F5 is relative. When the formula is copied down the column, F5 changes at each new row. The two named ranges, times and states, are are fixed and do not change. In each row, SUMIFS correctly shows the total hours logged for a given state. Note when time exceeds 24 hours, you will need to use a custom time format as explained below.

With normal time formats like hh:mm, hours will "reset" to zero each 24 hours. This makes sense when the intent is to display an actual time, but it can be confusing when the total time exceeds 1 day, because hours appear to be lost.

To display time durations of more than 24 hours use a custom number format with hours in square brackets, as shown below:

For a more detailed explanation, see Sum time in Excel.

Sum time
Dates and times are just numbers in Excel, so you can use them in any normal math operation. However, by default, Excel will only display hours and minutes up to 24 hours. This means you might seem to "lose time" if you are adding up time that is...

Sum time by week and project
In this example, the sum range is the named range "time", entered as an Excel time in hh:mm format. The first criteria inside SUMIFS includes dates that are greater than or equal to week date in column F: date , ">=" & $F5 The...

Sum race time splits
Excel times are fractional numbers . This means you can add times together with the SUM function to get total durations. However, you must take care to enter times with the right syntax and use a suitable time format to display results, as explained...

Get work hours between dates
This formula uses the NETWORKDAYS function calculate total working days between two dates, taking into account weekends and (optionally) holidays. Holidays, if provided, must be a range of valid Excel dates. Once total work days are known, they are...

Group times into 3 hour buckets
If you need to group times into buckets (i.e. group by 6 hours, group by 3 hours, etc.) you can do so with a rounding function called FLOOR. In the example shown, we have a number of transactions, each with a timestamp. Let's say you want to group...
Related functions

SUMIFS is a function to sum cells that meet multiple criteria. SUMIFS can be used to sum values when corresponding cells meet criteria based on dates, numbers, and text. SUMIFS supports logical operators (>,...