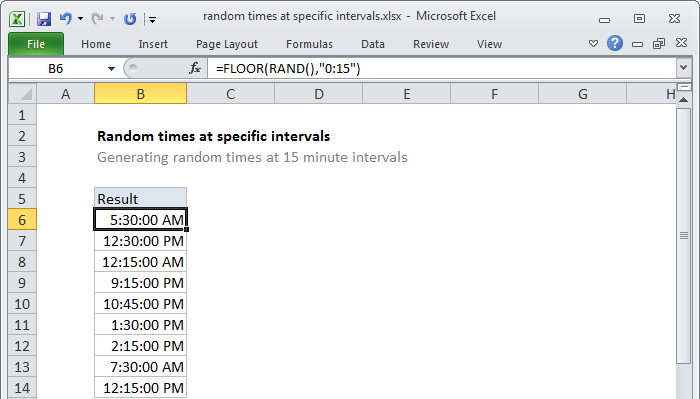 To generate random times in at specific intervals you can use the RAND function with the FLOOR function. In the example shown, the formula in B6 is:

which generates a random time at a 15-minute interval.

The RAND function generates a decimal number between zero and 1. So, you might get output like this from RAND() in three cells:

Dates in Excel are defined as simple numbers, where 1 = 1 day. This means you can simply divide 1 by the decimal value of time to get a value that corresponds to time as Excel sees it, for example:

This means we can use RAND() to generate a decimal value between 1 and 0, then round that number down with FLOOR to the nearest interval. FLOOR takes a argument called "significance" as the rounding multiple, and it recognizes time intervals expressed like this:

Setting and upper and lower time

If you want to limit the hours used by RAND, you can use this general formula force RAND to output a number between an upper and lower value:

Because Excel can recognize time values, you can get times between 8 AM and 12 PM, with a formula like this:

Note: the formula above is general and will work with other numbers too, not just times.

Random number between two numbers
The Excel RANDBETWEEN function returns a random integer between given numbers. RANDBETWEEN is a volatile function recalculates when a worksheet is opened or changed. In the example shown, the formula in B5 is: = RANDBETWEEN ( 1 , 100 ) This formula...

Random date between two dates
The RANDBETWEEN function takes two numbers, a bottom and top number, and generates a random integer in between. Dates in Excel are serial numbers, so you can use the DATE function to create t he lower number and the upper number. RANDBETWEEN then...

Just found your website. I'm quite good with Excel but your site has encouraged me to delve deeper and improve my skill further. It's the best site I've ever seen. -David